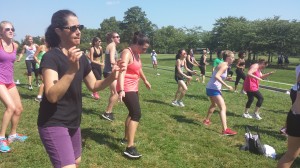 News has been going around that the Washington Monument has been experiencing elevator problems, but there was a reason to go to the National Mall last Saturday morning anyway.

((305)) Fitness held its Miami On The Mall in the Sylvan Theater.  The fitness event was a celebration of the two-year anniversary of this exercise phenomenon.

Now, what made this event special? Most likely it was the fact that the guests had to exercise outdoors, right in the vicinity of the blazing sun. Thankfully, cold beverages and 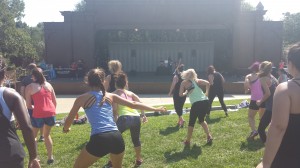 small towels were readily available for those who were prescient enough to use them to beat the heat!

Remixed versions of songs were played by a DJ while guests were following the moves that they’ve been guided to follow. The end result was a group of people who could move in nearly perfect harmony. For people who aren’t used to these workouts, they could find themselves wondering how they could keep up. To get into the rhythm of things, one needs enthusiasm, a lot of energy, and knowing how to move different parts of your body at a rapid enough pace so that you’re in tandem

In the end, moving around to music while wearing sporty attire is a way to celebrate one’s body (including what it can do) and life. What a fine way to celebrate a business’ two-year anniversary!