Friday night, the 2014 Fair Chance Butterfly Bash took place in downtown DC at the Andrew W. Mellon Auditorium. Staying close to its local roots, over 700 guests filled the auditorium in support of the long-time DC-based non-profit, Fair Chance, and to honor David and Carrie Marriott for their ongoing contributions to children and youth development.

The annual Butterfly Bash supports Fair Chance’s efforts to provides gratis management consulting services to other area youth-serving non-profits focused on children education and development.  This year’s event was sponsored in part by Koch Industries, Marriott, and The Washington Post, and, according to Fair Chance Executive Director Gretchen Van der Veer, marked the organization’s partnership with over 85 organizations that have reached more than 80,000 area youths.

While guests were sipping cocktails and nibbling on steak sandwiches in their finery, Fair Chance was able to  raise more than $60,000 from attendee donations during the live auction, hosted by former Washington NFL tight end, Chris Cooley. Following the auction, guests grooved to the tunes of a lively thirteen-member pop and soul band under the purple and silver lights of the Mellon Auditorium.

Post party, guests were treated to cookies from District Desserts and butterfly-shaped gummies as they headed home. 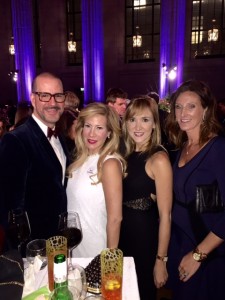 Previous Post: Star & Screenwriter on Hand For DC’s “The Theory of Everything” Premiere
Next Post: Sakara’s Supermodel “Diet” Does DC