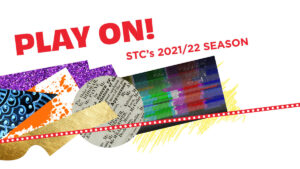 Shakespeare Theatre Company is resuming live performances in September according to Artistic Director Simon Godwin, and the Theatre’s 2021/2022 season will include some Shakespearean favorites and the first Broadway-bound musical premiering on STC’s stage: Once Upon a One More Time.

“We’ve titled our coming season ‘Play On!,’ after the famous opening phrase in Twelfth Night,” he said. “After such a long pause, we are ecstatic to safely welcome audiences back into our theatres for live performances. Play On! captures this playfulness and this urgency for theatre, for community, for being together again.”

The season opens with the musical, directed and choreographed by internationally acclaimed Drama Desk-nominated artists Keone and Mari Madrid (Beyond Babel, BTS, Justin Bieber’s “Love Yourself”). Once Upon a One More Time (NOV 30, 2021  – JAN 2, 2022) features an original story written by Jon Hartmere (bare, The Upside) and the music of Grammy Award winner Britney Spears. Creative Consultation for the production is by five-time Tony Award nominee David Leveaux (Nine; Romeo & Juliet on Broadway; NBC’s Jesus Christ Superstar). The show’s previously announced debut in Chicago was canceled when theater industry operations were suspended due to the Covid-19 pandemic.
“In my first season at STC, I made a promise to offer shows for all ages for the holidays, and Once Upon a One More Time is a jubilant, funny, and rousing update on classic fairy tales that will delight all audiences,” shares Godwin. “Britney Spears is an American pop icon, and the team of this musical has worked with her to craft a story that captures her joie de vivre and her indomitable spirit. We are beyond thrilled to have our first Broadway-bound production, and for it to be this inspiring, empowering musical.”

In addition to the musical, STC Associate Artistic Director Alan Paul (Camelot) will direct Thornton Wilder’s OUR TOWN (FEB 17  – MAR 20, 2022) with a cast that celebrates the artistic talent of the D.C. area. An American classic set in the fictional town of Grover’s Corners, the play has continued to captivate audiences with its minimalistic set, metatheatrical commentary, and its probing questions about love, life, death, and belonging.

“Shakespeare remains our lodestar,” Godwin says, “and we are excited to produce three Shakespeare-centric titles that we previously announced.”

A co-production with Theatre for a New Audience in New York City, THE MERCHANT OF VENICE (MAR 22  – APR 17, 2022) will feature the STC debut of John Douglas Thompson (Mare of Easttown, Satchmo at the Waldorf) as Shylock. Shakespeare’s problem play will be directed by TFANA’s Resident Director Arin Arbus. Thompson and Arbus are both TFANA resident artists.

After the international acclaim for his filmed-for-television production of Romeo & Juliet starring Jessie Buckley and Josh O’Connor for National Theatre of London, Godwin plans to direct MUCH ADO ABOUT NOTHING (APR 21 – MAY 22, 2022) set in a contemporary cable TV newsroom. “Beatrice and Benedick will bicker in front of the camera while behind the scenes they fall in love,” he explained.

The season will conclude with RED VELVET (JUN 16  – JUL 27, 2022), written by Lolita Chakrabarti and directed by Jade King Carroll about the great Shakespearean actor Ira Aldridge. During his lifetime, the American-born Black actor played many of Shakespeare’s most notable roles across Europe, and this thrilling play centers his debut as Othello on London’s greatest stage.

STC is also offering two special pre-season limited engagement productions outside of the subscription season. James Baldwin’s masterpiece THE AMEN CORNER (SEP 14  – 26, 2021) will return to STC for a two-week run. Directed by STC Associate Director Whitney White, the play was a critical and commercial success, but its original run was curtailed in March 2020 by the pandemic. Academy Award nominee David Strathairn (Good Night, and Good Luck; Nomadland) will play the titular Holocaust witness, activist, and Georgetown professor in REMEMBER THIS: THE LESSON OF JAN KARSKI (OCT 6  – 17, 2021), written by Derek Goldman and Clark Young, and directed by Goldman.

All dates and titles are subject to change.