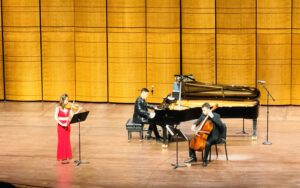 Tickled best describes Lionel Yu‘s fingers across the piano as he played an EDM dubstep remix of Beethoven’s 5th Symphony — and his feelings about doing it for a sold-out crowd at the Kennedy Center.

While over a million subscribers tune in to Yu’s piano work on his MusicalBasics YouTube account — where videos regularly go viral — the chance to see him play in person is rare.

Recently the financial analyst-turned-professional musician realized a childhood dream of taking the stage at the nation’s premier performing arts venue.

The enthusiastic audience, including Yu’s own high school music teacher, enjoyed an ambitious program of his most popular pieces featuring remixes of the masters, as well as his own biggest hits like “Fires of a Revolution” and “Rolling Thunder.” Yu was joined on stage by guests Soo Yeon Kim (violinist) and Jeremy Russo (cellist).

In what Yu said was his “biggest show to date,” MUSICALBASICS, A Transcendental Experience at the Terrace Theater also gave audience members special surprises – such as debuting all-new pieces like “Eternal Sunrise,” the chance to see Yu’s personality when not playing piano, and the opportunity to weigh in on the program’s play set… The crowd nearly unanimously chose to finish the concert with a violin rendition of Four Seasons by Vivaldi — in which Yu “crammed the entire Four Seasons in to four minutes.”

Previous Post: Inside the #WearYourCrown Exhibit Opening at the Hotel Zena
Next Post: DVF Receives RBG Award at LOC (and that’s so DC)