“I told you this night was like nothing you’d ever seen before.  When was the last time you saw a brotha in a suit, tie and wing tips playing the conga??!” laughed ABC-7’s Leon Harris, emcee for the 6th annual DC College Access Program (DC-CAP) DC-CAPital Stars Talent Competition at the Kennedy Center Tuesday night. 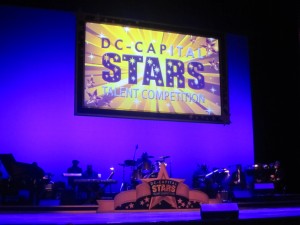 The audience really did see it all, from dance and piano to cello and show tunes, as 9 finalists (one was injured and unable to compete) from DC public and public charter schools competed to win college scholarships in this year’s DC-CAP major annual fundraiser: A Tribute to Broadway.

This year more than $700,000 was raised for DC CAP’s work, to include college scholarships, in an effort to assist every DC public and public charter school student to have a chance to go to — and graduate from — college.  DC Public Schools Chancellor Kaya Henderson and Lockheed Martin Corporation were recognized for their assistance in working toward the goal of graduation with the Educator of the Year and Corporate Partner of the Year awards, respectively.

But while academics were a factor, it was the arts that were the focus of the star studded event.

“We’ve got a musician that can play, a singer that can sang and a dancer with feet that’ll make your whole body want to do something,” Harris laughed as he introduced celebrity judges that would headline the Idol-style competition (with audience members assisting with the vote via handheld electronic device).  These comprised Tony-winning star of “Pippin” Patina Miller, Grammy-winning bassist/vocalist/composer Esperanza Spalding, and Tony-award winning hoofer Savion Glover providing support and feedback on each performance.

Despite strong showings from all finalists, winners had to be chosen.  And the winners were:

And it seems Sumbry’s win may well be taking him places (in addition to college affordability, that is).  Savion Glover was was so impressed with his percussion prowess that he immediately offered him the chance to work with him on an upcoming show in the Big Apple.