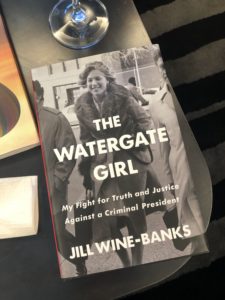 “We were the children’s march against the wicked King,” quipped Watergate prosecutor Jill Wine-Banks, author of Watergate Girl at an intimate book discussion of her brand new release last week.

Held at the Watergate, the very hotel that engaged history in June 1972, the Watergate Girl book event was attended by close friends of the author, including Congresswoman Jackie Speier (D-CA) and Congresswoman Nita Lowey (D-NY).

She originally wanted to name the book Dancing Backwards in High Heels.  “When the title was first suggested, I said, ‘Girl?! Absolutely not.’ Then it was pointed out how many bestsellers had ‘girl’ in the title and I sold my soul,” Wine-Banks laughed, adding that the word ‘girl’ actually captures the era like no other word could. 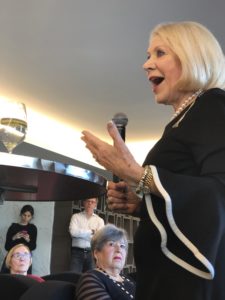 She wanted to write a book that would fit on the shelf next to the likes of Katharine Graham’s biography and Katy Tur’s Unbelievable, and in the end, wrote what may be best described as a combination of All the President’s Men and Hidden Figures.  It’s a lot about the Watergate scandal, but equally about the “hurdles women have overcome to be half as good as men.”

Not just a history book, but also a personal memoir, the book puts Wine-Banks at the crossroads of the women’s movement and a Presidential scandal… twice. Now, at the time of #MeToo and another presidential scandal, Wine-Bank admits, “I do worry about the #MeToo movement having a negative impact.”

“There were no role models for me,” she said, and “the discrimination I faced was real, and hurtful and harmful… but I’m glad my parents raised me to think I could and to do it.”

As a Watergate prosecutor, MSNBC contributor, and author, Wine-Banks isn’t afraid to make shocking revelations about both the past and the present, and her book is full of them.

“We are in a world where I still believe in facts,” she says.

She also believes that “if there had been a FOX news back then — and a social media — Richard Nixon would have been exonerated… There is nothing in the Constitution that says you can’t indict a sitting President. Now, politically, it’s a different story.”

The Watergate Girl is currently available at booksellers nationwide.