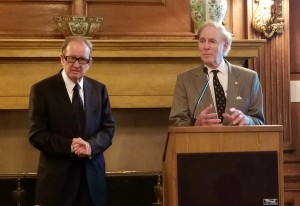 Who doesn’t love to share their frustrations about Beltway Insiders these days?

Earlier this week, former congressman Cliff Stearns, along with his guest and friend, journalist and author Patrick Buchanan, were on hand for a special luncheon and discussion to deliberate on the state of American politics.

Of particular interest to the crowd gathered at the Metropolitan Club was Stearns’ recently published Life in the Marble Palace (In Praise of Folly). The book is a reflection on his 24 years in Congress, with ruminations ranging from his readings to on the job education, and from his faith to everyday life experience.

In the book — and in this week’s luncheon discussion — Stearns advocates for serious changes in the American political process. It seem everyone is critical of politics these days, so why is this different or unusual? Because one can always afford to be critical of processes — and colleagues — once off the Hill, yet Stearns’ record seems consistent on this, even while in office. And it’s always fascinating to watch one of  the “Distinguished Gentlemen” unabashedly hold some of his former colleagues to task, especially as he is currently the President of the United States Association of Former Members of Congress (USAFMC).

To criticize is one thing, but to actually put forward a plan is quite another.  As outlined in Life in the Marble Palace, Stearns’ main concerns are budgetary: rectifying the national debt, reforming campaign finance, and staving off entitlement funding.  For the latter, he recommends a commission similar to BRAC to independently and individually assess each program to inform up on its ROI.

Stearns represented Florida’s 6th district from 1989 until 2013, during which time he also chaired the Oversight and Investigations Subcommittee, the Subcommittee on Commerce, Manufacturing and Trade, and the Transatlantic Dialogue for the European Union. He has been a member of the Committee on Energy and Commerce and the Veterans’ Affairs Committee.  Currently he is the Executive Director at APCO Worldwide.