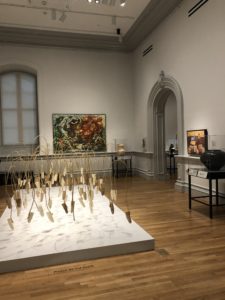 Currently on view at the Renwick Gallery of the Smithsonian American Art Museum is the first major thematic exhibition ever to explore the artistic contributions of Native women.  Eighty-two artworks dating from ancient times to one finished mere months ago, “Hearts of Our People: Native Women Artists” is a rare collaborative effort among an advisory board of female indigenous nations that showcases the art of making as a tool for communication through time. 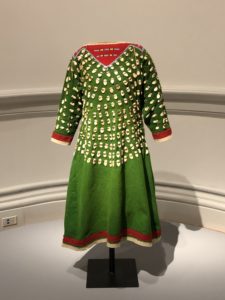 “Native women have created most of the native art that you are familiar with — including antiquities,” says Teri Greeves, Kiowa, an independent curator.  “One of our biggest jobs has been passing the mic… giving access directly to First Nations,” since most of the world doesn’t know that women make so much of what we envision when considering native culture and art. 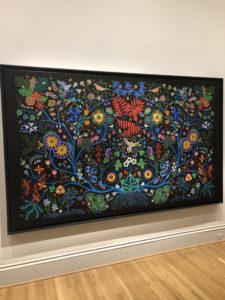 The exhibit is highly interactive, with the ability to hear so many of the artist’s voices through audio presentations.  It is also multi-lingual, with wall text and audio presented both in the artist’s Native language as well as English.

Arranged in three parts, according to a trio of overarching themes which answer the larger question: “Why do women create?“, Legacy, Relationships, and Power describe the purposes for which Native women have historically made art. 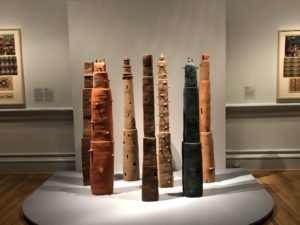 to explore belonging, identity, and secrecy.  Idiot Strings, The Things We Carry speaks of the painful loss to suicide, but also keeps a connection to the environment.  Exhibit visitors will especially enjoy a perfectly mesmerizing pointillist painting (The Wisdom of the Universe) depicting Canada’s threatened or extinct animals and plants, a duo of paintings (Nebula 22 & 23) inspired by images from the Hubble space telescope, and wearable art like Jaime Okuma’s meticulously beaded and quilled Louboutins and other wearable regalia like dance skits, feast wear pieces, and wedding coats that speak to the indigenous relationship with foreign powers. 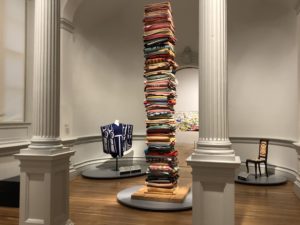 One of the most striking pieces — that strongly portrays the Native connection to the environment and cultural tradition — is Kelly Church’s Sustaining Traditions — Digital Memories, that she describes as a “Fiber-gé Egg. “We usually pass on stories with our oral tradition,” she said.  Inside this black ash and sweetgrass vessel includes a specimen of the invasive Emerald Ash borer that destroyed the tree used to weave the basket, as well as a flash drive that details what needs to be known to continue this weaving tradition.

“Hearts of Our People: Native Women Artists” is on view at the Renwick Gallery of the Smithsonian American Art Museum through May 17, 2020.

Previous Post: John Malkovich is Coming to DC in ‘The Music Critic’
Next Post: Did Someone Say A Week Of Free Movies?!