John Malkovich is set to star in the US premiere of The Music Critic, at the Kennedy Center.  The show 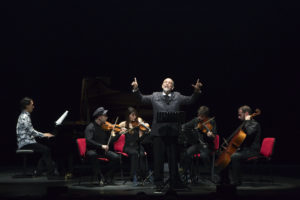 collides classical music, theater, and comedy and will take place from April 28 – May 7, 2020.

In The Music Critic, Aleksey Igudesman (of the classical music comedy duo Igudesman & Joo), has created a witty, satirical mix of the most venomous music critiques of all time written about some of the greatest composers and the most famous works of music.

Given this menu of musical insults, John Malkovich plays the narrator, slipping easily into the role of the evil critic who believes the music of Beethoven, Chopin, Prokofiev, etc. to be a bore.

Igudesman and Hyung-ki Joo, along with a host of outstanding musicians, beg to differ. Malkovich’s
bravura delivery of this display of back-biting criticism is accompanied by a kaleidoscope of music by
Bach, Mozart, Beethoven, Chopin, Brahms, Schumann, Debussy, Prokofiev, Ysaÿe, Kancheli, Piazzolla,
and includes music by Igudesman himself.

John Malkovich says, “I have always loved the opportunity to collaborate on The Music Critic with
Aleksey Igudesman, Hyung-ki Joo, and many other gifted and thoughtful young classical musicians. We
are all happy to be back on the road, and for the first time also in the USA, participating in an evening
which consists of some of the greatest compositions in the history of classical music, paired with the
perhaps rather unexpected initial reactions those compositions elicited from some of the world’s
renowned music critics, along with some other surprises.”

Previous Post: We’re Burning Up Over This Eating Contest in Arlington
Next Post: ‘Hearts of Our People’ First Major Exhibit Exploring Native Women’s Art, Comes to the Renwick