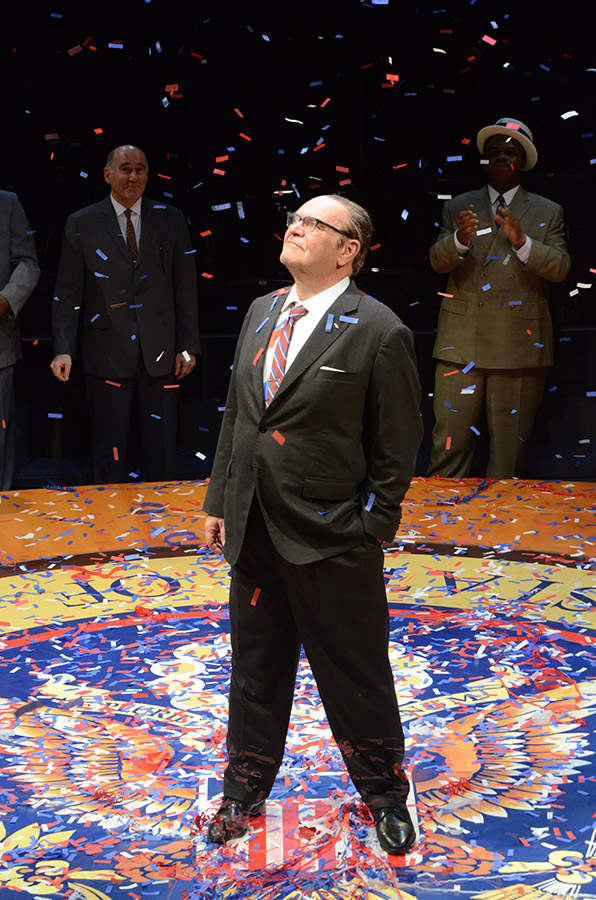 You know a play is something else when you are sitting between an eleven-year-old boy and a current Supreme Court justice – a history lesson with something to teach everyone. Technically, I wasn’t right next to Ruth Bader Ginsberg, but we were on the same row (#swoon #fangirl #NotoriousRBG). Tony Award winning drama All The Way tells the history of President Lyndon Baynes Johnson’s muscled passage of the Civil Rights Act of 1964 in a style reminiscent of a House of Cards and David McCullough biography mash-up. With the country reeling from President John F. Kennedy’s assassination, and a rising tide of bitterness over Civil Rights, LBJ uses an arsenal of tactics to navigate the political process and public opinion through a maze of politics and policy, never losing his brash Texas charm or his eye on the prize. 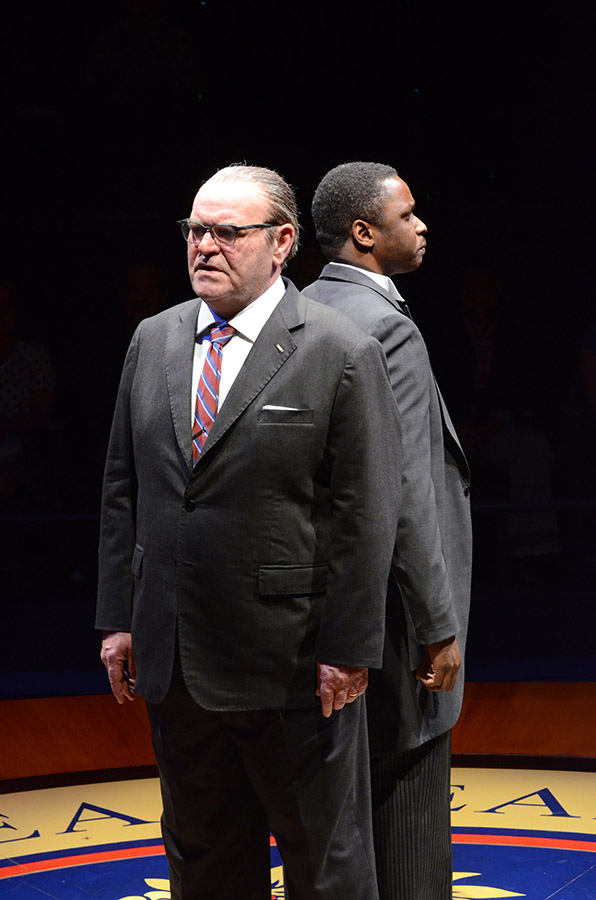 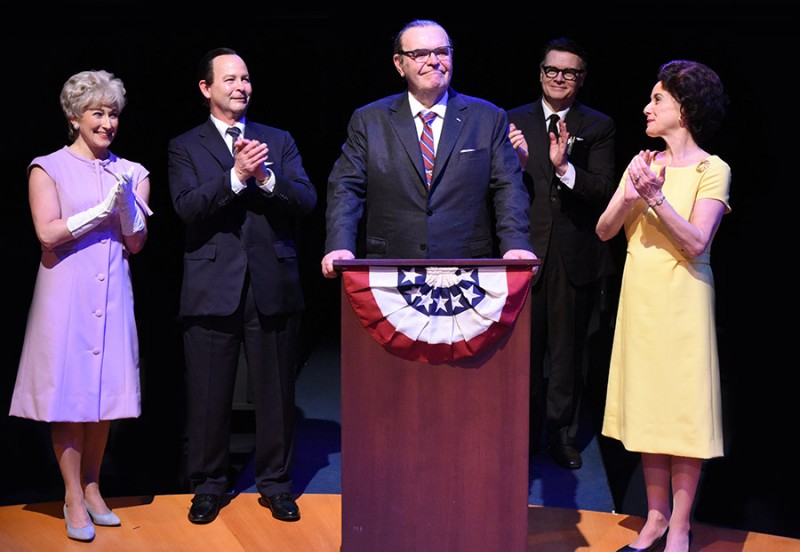 An impressive 17 actors cross the theater-in-the-round as politicians, wonks, civil rights leaders, and the women in their lives. Kate Edmunds’s set pieces fluidly whip through quicksilver changes, the movement and motion replicating the man himself. All onstage are resplendent, Nan-Cibula-Jenkins’s costumes and Anne Nesmith’s wigs weaving a visual tapestry of the era. All are in the shadow of Willis’s simmering LBJ. While the President is not the exclusive focus of the play — many passages focus on Dr. Martin Luther King, Jr. (Bowman Wright), strategizing leaders of the black civil rights movement, and venerable, dogmatic politicians whose names now adorn Congressional office buildings — Willis’s performance dominates, even when he’s offstage. 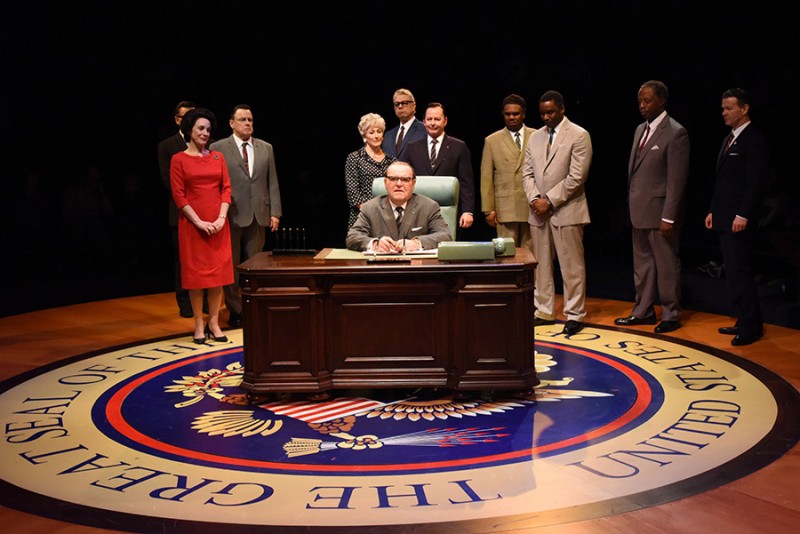 Pragmatic, folksy, even crass, LBJ dispatches with contempt those who preen their lofty ideals rather than seek viable compromise. The President equally shakes hands and wrings arms to cajole, even sweetly blackmail, the Civil Rights bill’s supporters and detractors. With sledgehammer energy interrupted by moments of tender melancholy, Willis portrays a man desperate to pass a bill because it is aligned with his deepest beliefs . . . and will help him secure re-election. All The Way will flutter the wonky hearts of Washingtonians – the boards so rarely captivate with references to cloture, filibusters, and the procedural moves to wrench bills from the stranglehold of committee. 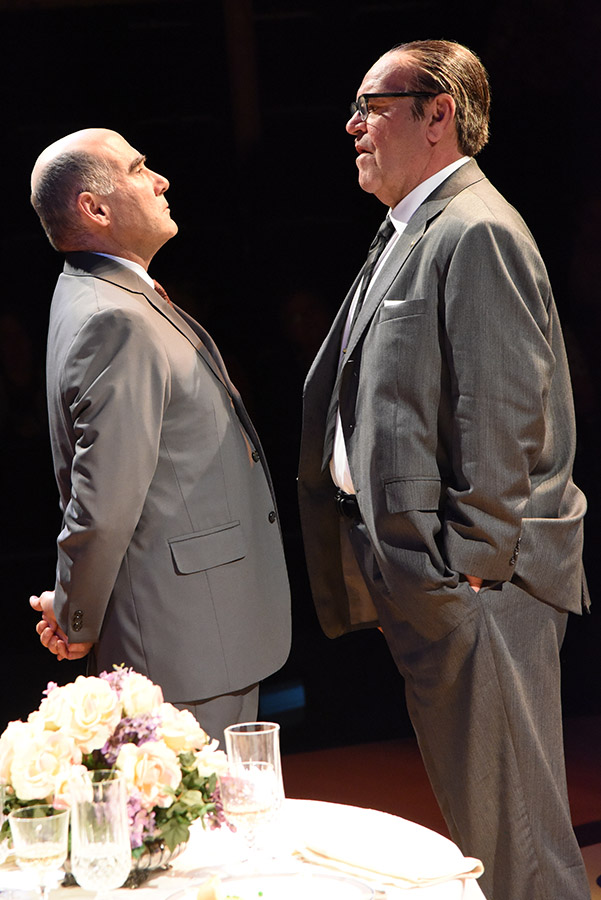 Considering it wasn’t that long ago, the story gains an extra sepia tint when held up next to the rancor of today’s discourse. Gone is the “nostalgic” era of Southern democrats, compromise across party lines, Oval Office-Congress collaboration – in a word, effective politics. The story is historically fascinating but poignant in the malevolent antipathy of 2016. Some things seem unchanged: philandering and sexual scandal, avid multi-media scrutiny and manipulation of that, backroom meetings, back stabbing. Different is the leadership. The collaboration and compromise (by any means). For all his raw edges and brutish determination, you get the sense that it takes an LBJ to get the hard, but right, things done. His civil rights was our gun control or wall street reform. His methods were morally questionable, but his passion was valiant. You could feel the electricity of many in the audience reliving an era they’d survived once already. After watching All The Way, I’d like a little more LBJ in my life, too. 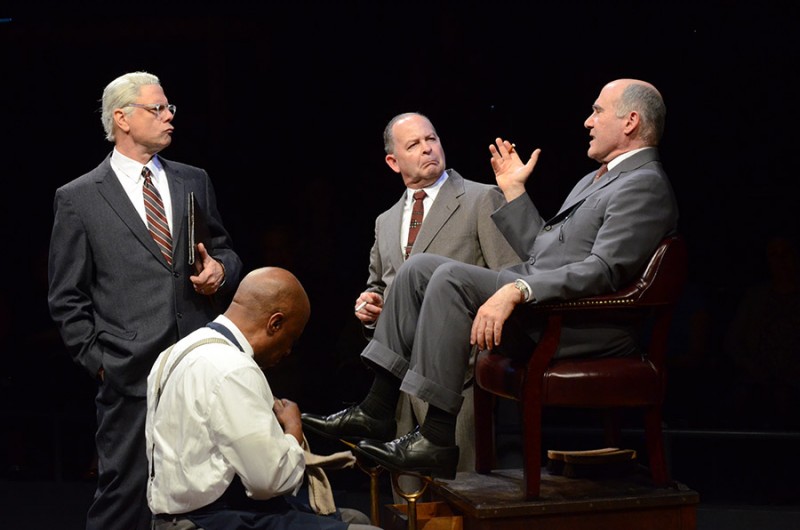 Like Arena’s recent The City of Conversation, this production celebrates a bygone era of civility in politics. All The Way truly is a Washington power play. Don’t miss it. 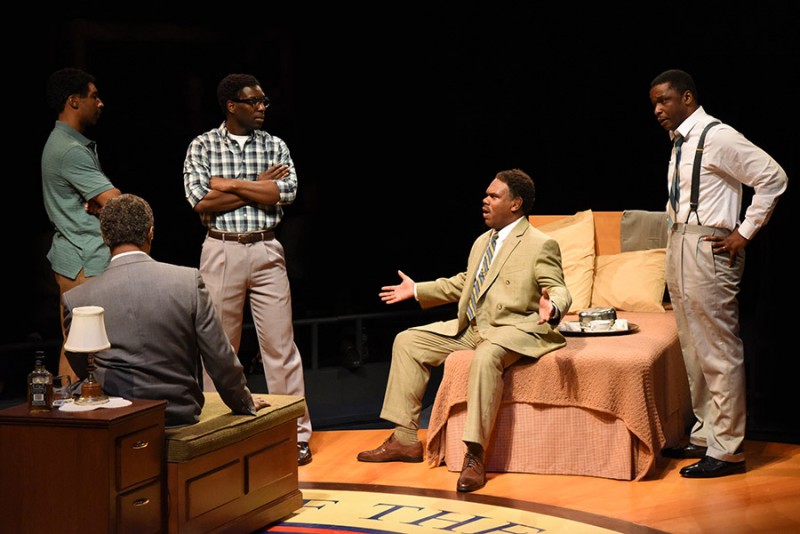 Previous Post: The Jersey Boys: Still Poptastic After a Decade
Next Post: A Sneak Peek of SweatBox