It’s about tradition.  It’s about juxtaposition.  Oh, who are we kidding?!  It’s all about the food!! 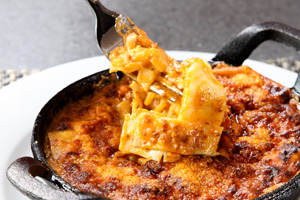 from the Piedmonte region of Italy, Executive Chef Roberto Donna’s homeland, which is situated between the region’s wine country and agricultural center.

Joined by Chef de Cuisine Amy Brandwein, who previously served as his executive chef at Galileo, Donna has created a menu comprised of house-made pastas (small and large portions) and Neapolitan pizzas — with “Italian sized” portioned daily specials, designed to be ordered and shared for the table in a Piemontese fashion ($5-$19). 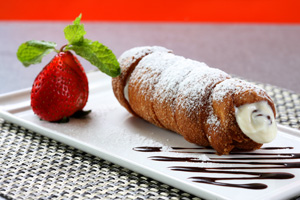 Alba’s interior is where old world meets new, where jolts of bright orange assault an otherwise everyday interior of black and white.  Glamorous finishes contract with hints of the industrial.  And lighting is a mix of turn-of-the-century industrial luminaires, stage lighting, and chic black chandeliers… all providing visual contradiction.

The ambiance attracts, but it’s food first.  And all in all, you may just be so charmed by the osteria’s offerings you’ll forget you’re not in the boot, but still in the Beltway.

Previous Post: Apres Ski at the POV
Next Post: Get Your FREE Sandwich When Capriotti’s Opens in DC