The Shakespeare Theatre Company has just announced the Company’s 2020/21 Season. According to 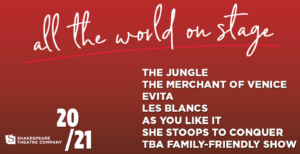 “Our motto for this season is, ‘All the world on stage,’ to paraphrase Shakespeare’s line. We will explore dynamic works set in Latin America, Africa and amongst refugees in Calais,” continues Godwin. “This selection of plays reflects our global consciousness.”

The season opens with the first-ever collaboration with nearby Woolly Mammoth Theatre Company, The Jungle. This production will transform Sidney Harman Hall into a refugee camp where patrons sip tea together and share accounts of community and conflict at a café that sits at the camp’s center.

For the holidays, STC reimagines the musical Evita; later it revives Les Blancs.

“We are bringing the best of the U.K. theatre to D.C. next year,” says Godwin, speaking of new productions for the upcoming season of The Merchant of Venice, As You Like It, and She Stoops to Conquer, the latter an 18th-century comedy of misplaced marriage plans, controlling parents, and nighttime hijinks.

Lastly, a family-oriented play will be announced at a later date.

Subscriptions are on sale now. Packages and single tickets will be available for purchase this summer. Performance dates for the season will be released in the coming weeks. All artists and titles are subject to change.