Monday night at the opening reception of Millennial Week, four outstanding Millennials were given top honors for their influence on culture, entrepreneurship and social good. During a lively party at the Pepco Edison Place Gallery, awards were given to the people most dramatically 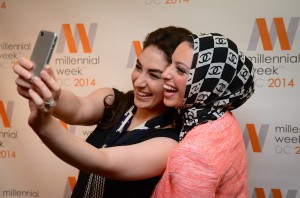 shaping the Capital City — and the country at large.

Darla Bunting, founder of First Book-DC won the Social Good recognition for her work supplying schools and programs with books (and the funds to buy books), as well as her role as capital director of Capital Cause, which trains teams to fund grants for local nonprofits.

In the category for Entrepreneurship, Jonas Singer and Cullen Gilchrist were honored as co-founders of Union Kitchen, which lowers the barriers for entry into the food business and helps change kitchen and restaurant spaces throughout the DC Metro. 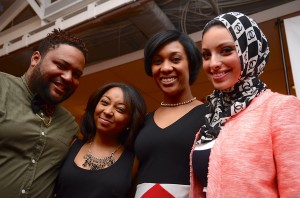 Ariana Austin, founder of Art All Night: Nuit Blanche DC, was praised in Arts + Culture for organizing the mash-up of 20 venues, 50 visual artists, 11 cultural partners, and more than 15,000 attendees.  She is the founder of the production agency French Thomas Creative, and her writings on travel, culture and foreign affairs have appeared in several major publications.

The reception was the first in a series of events focusing on the impact the Millennial generation (born between 1977 and 2001) is making on culture, enterprise and society, and was kicked off with an energetic speech by restaurateur and philanthropist Andy Shallal.  He says Generation X was revolutionary… but Generation Y is more solutionary… what do you think?

Previous Post: West Side Story Returns to Where It All Began
Next Post: Inside the Inaugural Taste of Tyson’s