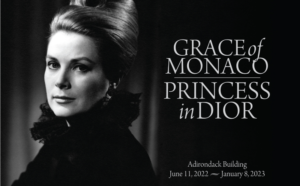 She was the embodiment of style. Hollywood glamour and royal stateliness. And now DC guests can take in all of the haute couture (with a little bit of a history lesson).

A new exhibit at Hillwood features fashion and mementos from the legendary life of Princess Grace of Monaco, including items celebrating her dedicated collaborative relationship with Marc Bohan, artistic director at Christian Dior, which are on view in North America for the first time.

Close to a third of Kelly’s wardrobe was Dior, not only because the house was so prestigious but also because she was such close friends with Bohan.

According to Florence Müller, fashion historian and curator of the original exhibition at the Musée Dior in Granville, France, “Bohan perfectly understood her role [leaving Hollywood to marry Prince Rainier III of Monaco in 1956]: she needed to be stylish, but respectful of etiquette.”

On loan from the Palace of Monaco, 83 pieces of Princess Grace’s clothing, accessories, photos, and more — some never previously displayed — offer insights into the life of an icon whose image reflected Hollywood’s wish for glamour and the desire for elegance in her stately duties.

The exhibition is not only a beautiful sight to behold for fashion lovers, but offers insights into the life of an icon, whose image was created in response to Hollywood’s wish for glamour and the desire for elegance in her stately duties. Grace of Monaco is a tribute to Bohan’s muse in the 1960s and 1970s and a celebration of their enduring partnership through haute couture.

Grace of Monaco Princess in Dior will be on view at Hillwood’s Adirondack Building through January 8, 2023.