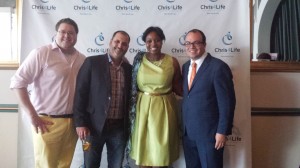 Colorectal cancer may not get as much awareness as breast cancer, leukemia and lymphoma, but it’s a disease that has touched the lives of many, including the people who supported the Chris4Life Colon Cancer Foundation’s and Never Too Young Coalition’s fifth annual “Fabulous” event last week.

For colorectal survivors, patients, and people who have lost someone to colorectal cancer, the night was an opportunity to get together with loved ones… and feel fabulous. Alongside the non-profit message, there were also fun opportunities to celebrate life — like taking pictures while wearing feather boas, star-shaped sunglasses, and party necklaces. 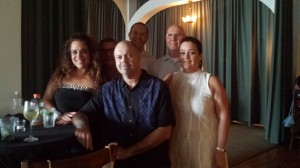 The “Fabulous” Happy Hour took place inside of the Clarendon Ballroom (originally scheduled for the building’s rooftop, but moved because of concerns about inclement weather), yet the bar had an intimate feel with dim lighting, and, nearby, a DJ was playing lively tunes.

This fifth annual event was a night to raise awareness, in particular, among people who are under age 50 — and at an increased risk of getting the disease. Michael Sapienza, founder and president of Chris4Life, 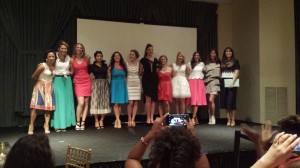 For example, Dawn Eicher, 36, was on hand to share her story. Thankfully now in remission, Eicher remains passionate about getting health insurance providers to pay for colorectal cancer screenings before the age of 50. She suggested that, had they detected the cancer when she was a lot younger, hers wouldn’t have been as severe. Her petition for this on Change.org attracted close to 80,000 signatures.

The evening presentation ended on an empowering note, showcasing some fabulous fashion!  A mini-show featured items from Current Boutique and The Pink Armoire,