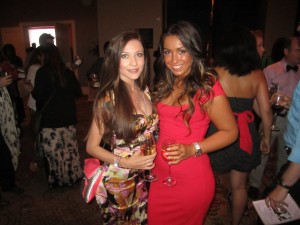 of America brought it’s annual anticipated Gala fundraiser, Charity in Chocolate, back to the Mandarin Oriental.

Attendees tucked into tempting stations of sweet and savory scrumptiousness provided by 50+ of the city’s top restaurants before settling in to watch entries from 13 creative chefs/pastry chefs walk the runway… These models were clad in outrageously intricate ensembles of chocolate and sugar!

The non-profit, joined by hosts The Ambassador of Italy to the United States, Claudio Bisogniero, and his wife, and 2013 Chair Ken Harvey, announced awards for The 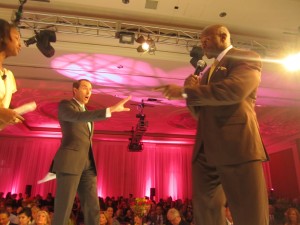 Hero of the Heart Award to recognize charity work in the community, and the Principal of the Year Award to celebrate educators gong above and beyond, before holding a paddle auction to raise money for HOA’s library-building efforts.  And then it was time for a sweet show!

In the end, it was 2941’s Caitlin Dysart who took top honors with her rendition of the Snow Queen from the Hans Christian Anderson Fairytale (see video).

Dystart’s design, which relied heavily on hardened and formed sugar, marked her first win, ending the streak of Shaun McCarthey (now at Rasika West End), who competed with an original design of the cartoon character Poison Ivy.

See more photos from the event and runway here.

One thought on “[Vid] Charity in Chocolate”