Imagine they one-upp’d your favorite Cirque du Soleil show… by adding graceful live animals.  That’s what it’s like to see Cavalia’s Odysseo under the big tent at National Harbor.  For a very limited time, watch a troop of artists, dancers and riders from around the globe performing

Cavalia is back in town after a successful run — first seen near Pentagon City in an extended offering a few years ago — and if you haven’t made plans to see it, do so. Now.

Normand Latourelle (pioneer of Cirque du Soleil) has surpassed himself with this performance event, breathtaking from the first moments (the stage in itself is a stunner) and spellbinding as it continued. “Whether on two or four legs, each artist adds a personal touch,” Latourelle told KSM, and the touches given by this cast of 63 horses and 47 artists in a larger-than-life theatrical production reach beyond the imagination.

Cavalia, the original, celebrates the relationship between humans and horses in a loose recounting of the evolution of their bond. Odysseo, 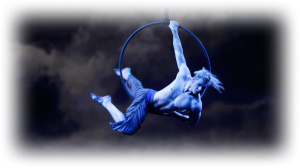 continues the story — with an aura something near Game of Thrones meets Tribal — taking the audience on a journey of discovery… particularly over the planet’s most unforgettable landscapes.

From acrobatic feats to animal majestry, Odyseeo is an art to behold, boasting the strongest and nimblest of athletes — both two and four-legged.

Odysseo remains at National Harbor until October 27t and is currently offering a “Shutdown Special” of up to 50% off (when you buy 8 tickets or more).

*All images courtesy of Cavalia.