What would a symphony taste like?  Think about it.  Is it sweet and juicy, savory and complex, or a little nutty perhaps? 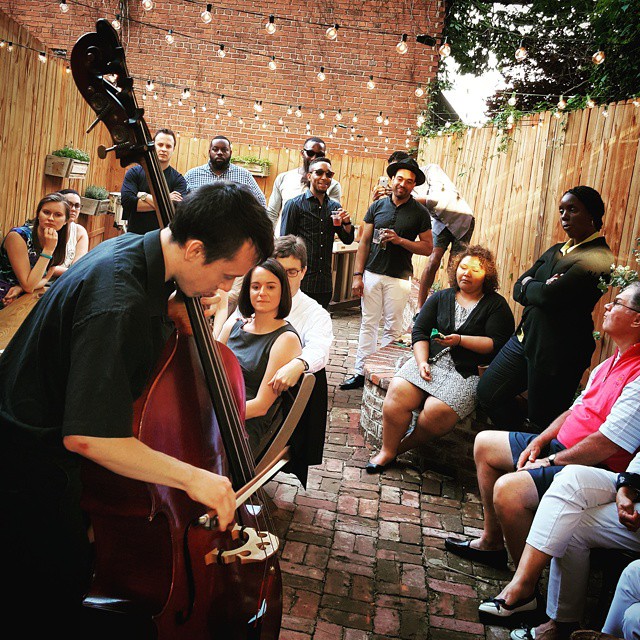 The actual flavor is quite scrumptious according to Gourmet Symphony, a local start-up that wants to introduce you to A New Taste in Music.  The concept is simple.  As you listen to the music, you enjoy a truly accompanying menu, with custom food and drink paired to the orchestra’s music program.

“Throughout our process of building menus… we discovered that many chefs with whom we are working have a musical background or a culinary career that has been largely influenced by music,” John Devlin (Artistic Director) and John Coco (Business Director) shared with K Street Magazine.  “It is no surprise that chefs love listening to music while they whip up their next masterpiece on a plate. However, the deeper we dug, the more correlations we found between the score and the creative process chefs use when approaching cuisine.”

“For example,” they said, “when working with Chef Andrew Markert at Beuchert’s Saloon, we learned that he LOVES blasting Pearl Jam while he’s putting the finishing touches on some of his most popular dishes… like the grilled bison hanger steak. It makes sense to us that rock and roll demands some open flames!  Not only for aesthetic purposes [do rock and grilling go so well together], but also the smokey charcoal accent flavors within the dish would be more subdued if it were prepared any other way.”

It seems a culinary concert can have a variety of marvelous movements: “A simple herb like rosemary can conjure imagery of a bustling city scene that Rossini translated from his imagination to the page when writing the opera The Barber of Seville,” Devlin explains.  “Or brining beef in a sauerbraten style  –unique to the Germanic culture — can focus the listener to subtle bow changes in the strings during Beethoven’s Symphony No 1., especially the dramatic energy in the first and last movements.”

Unlike a traditional symphony concert you may have experienced, Gourmet Symphony patrons will enjoy a pre-concert reception, choose their own table seating, meet and mingle with the musicians, and obviously, eat and drink during the performance.  Each musical piece is complimented and enhanced by the symphony of flavors happening on the listener’s palate — every bite and every sip.  (Just like pairing beverage with food, one component won’t overpower or contradict another.)

The plan is for the audience to be engaged at the intersections of taste, touch, sight, sound, and aroma.  The concept looks to contribute to the way audiences experience classical music, while also providing local artists with a new outlet to share their craft, and connecting DC’s musicians and artisans in a one-of-a-kind collaboration.

In addition to its a larger events, be on the lookout for Gourmet Symphony’s Saloon Concert Series from now through the next season, where the Gourmet Symphony team will partner with food and beverage connoisseurs to present intimate culinary-inspired chamber concerts at local restaurants and hot spots!