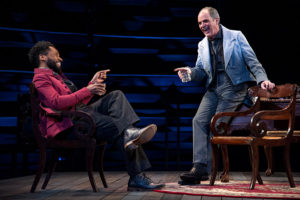 Despite its hip title, JQA at the Arena Stage Arlene and Robert Kogod Cradle at the Mead Center for American Theater is not Hamilton 2.0 – the John Quincy Adams Story (1767-1848). Playwright and director Aaron Posner’s world premiere has the freshness of Lin Manuel Miranda, but the gravitas of present day evening news. Posner abandons the idea of making the dour, privileged, hyper-intellectual Adams sympathetic, instead making him refractive – asking how can we use Adams’s history as a lens to understand the politics of today?

While this review isn’t selling Adams as a dude you’d want to grab a drink with, don’t be put off this 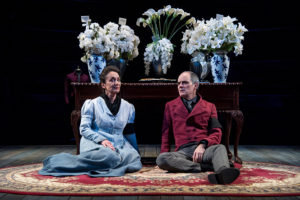 Meghan Raham’s stage is unfussy, emphasizing the actors, adapting scene to scene with economical change-outs. A nice touch are the dressing rooms encircling the stage, Hollywood vanity mirrors taped with fan tribute pictures of Adams, reminding the audience of the play’s dissectional nature. Helen Huang’s costumes enable quick character changes, with Adams red frock coat a character of its own.

Posner has acknowledged that the play isn’t historically scrupulous, but anyone who doesn’t have well worn copies of John Quincy Adams biographies by the bedside will learn a lot about the lesser known statesman and President. Posner both lays bare the shortcomings of the man burdened by blindered integrity, the quagmire of governance and public service, and the flaws in the systems that Adams generation created, 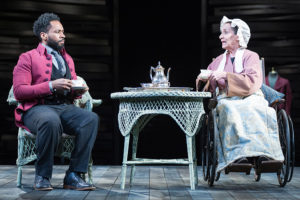 despite good intentions. Some monologues become a wee bit holy as they tap the fourth wall with obvious commentary on current events, but on the whole JQA offers a worthy, thought-provoking contemplation of the seeds of history and the modern day political jungle they yielded.

JQA is playing at Arena Stage Arlene and Robert Kogod Cradle at the Mead Center for American Theater through April 14, 2019 (1101 Sixth St. SW, Washington DC 20024). Running time: 90 minutes with no intermission. For information or tickets call 202-488-3300 or click here