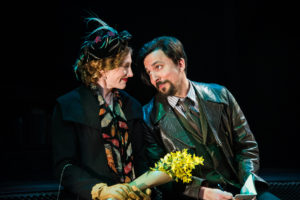 Play-within-a-play story lines are a common literary device in theater (say, Shakespeare’s Hamlet) and film (The Producers or Moulin Rouge). The meta-plays both advance the plot and highlight important themes or messages in the story.

Or, they can totally scramble your brain and leave you wondering “Wait, what?”– as is the case with Constellation Theatre Company’s current production of The Master and Margarita.

The show tells the story of a Russian playwright, “The Master,” whose play about Pontius Pilate and Jesus Christ crosses the deeply atheist Soviet literary elite of the time and lands him in an asylum. Meanwhile in an ironic twist, Satan (yes, as in the devil) arrives in Moscow for an annual gathering of hell-bound 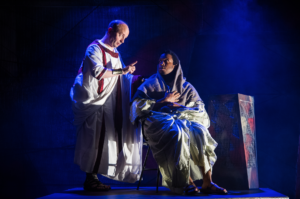 miscreants and decides to wreak havoc on these same literary elites. The Master’s lover, Margarita, desperate to know what has become of him, enlists Satan’s help in reuniting them, offering to act as hostess of the ball in exchange. All the while, parallels are drawn between the various characters with those in The Master’s Pontius Pilate script. Frankly, it’s a difficult-to-summarize jumble of subplots, studded with scantily clad vampires, gruesome murders and Hebrew buzzwords, seasoned with a dash of Christian theology. 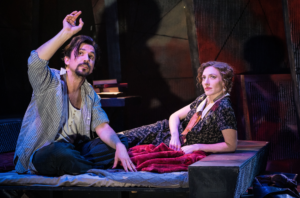 Don’t misunderstand me — as usual, Constellation Theatre delivers top-notch performances on a beautiful, intimate set. But perhaps some stories (in this case, a Russian novel) are just not meant for the stage. At the very least, come prepared to take notes so that you can attempt to decipher it all afterward.