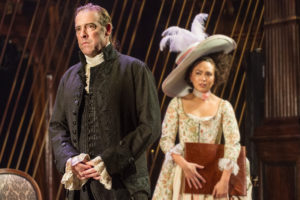 What lengths would you go to satiate your jealousy and rid yourself of a rival?  And once done, would you delight in it? Or would your guilt overcome you in the end? This is the gist of the captivating ‘Amadeus‘ now on stage at the Folger Theatre.

The entire story stems from some truth.  Mozart did claim shortly before his death that he was being poisoned — by Antonio Salieri — and after several decades, aged in an asylum, Salieri did confess to it, despite multiple later recantings. These may have been the rantings of deranged terminally ill man.  But rumors such as these couldn’t possibly provide a more dramatic, more salacious, story for the stage. 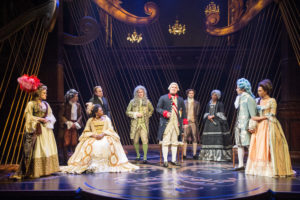 Peter Schaffer offers this tale of jealousy and genius to explain one version of the story behind the rumors. He stages the entire story from the perspective of the villain, Salieri, who believes that God has forsaken him and his talent, and put Mozart (and his mesmerizing music) in his way just to rub it in. He summons the audience to hear his confession, judging his tale — and him — in a poignant, often funny, and intensely dramatic series of flashbacks. 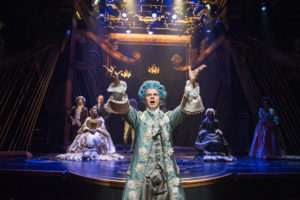 Director Richard Clifford calls it a “Revenge Comedy,” and audiences will feel both in equal measure. With its simply elegant set and exquisite costumes, Amadeus transports theatre-goers back to the salons of 18th century Vienna, while providing a wit and sarcastic humor that keeps modern audiences’s attention.

Of course, Samuel Adams plays the eccentric Mozart masterfully, but it is Ian Merrill Peakes‘ Salieri that should entice audiences to spend their evening at this performance.  Throughout the almost three hours, Peakes almost never leaves the stage, his endurance but one testament to his talent. While Salieri schemes with jealousy, desire, and bitterness — even while mesmerized with Mozart — Peakes manages to confuse audience’s loyalties, tearing them between abhorrence and admiration. 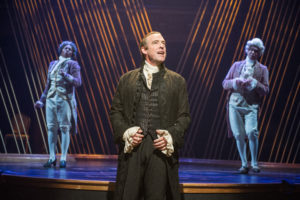 Salieri assures the audience that he would do almost anything to destroy Mozart’s reputation and sabotage his career. The irony is that, in his lifetime, Salieri was the greater success.  It was only after Mozart’s death that his legacy would solidify.  But Salieri — in Amadeus — wants for a legacy of his own.  And if it can’t be fame, he claims that must it be infamy… But can he even attain that?

Attend a performance to judge for yourself.

Amadeus is on stage at the Folger Theatre through December 22, 2019.  The play runs approximately 2 hours and 40 minutes, with a 15 minute intermission.

Previous Post: A First Look at the New Restaurant Opening in the Darcy Hotel
Next Post: Eat Well (for $10!) at This New Happy Hour in Adams Morgan