Looking for that perfect blend of Grease and Rocky Horror Picture Show for your Halloween tween? The Unexpected Stage’s production of Zombie Prom, playing through October 30 at Randolph Road Theater in Silver Spring, is your answer.

Zombie Prom has been around a while, an early book and lyrics by John Dempsey and music by Dana P. Rowe (which team later adaptedThe Fix and The Witches of Eastwick into Olivier nominated musicals). It’s a freshman writing effort, which shows in the under-developed script.  The show is a little schizophrenic – it doesn’t seem to know its audience (Adults? Kids? Zombies? McCarthyists?), but that very flaw makes it well suited for a multi-age group, or a silly night out.

Zombie Prom offers a kitschy trip back in time to a 1950’s America replete with bobby socks, bomb shelters, broken hearts, and zombies. After good girl Toffee dumps her bad boy boyfriend Jonny (a rebel with no-H), he kills himself by driving his motorcycle into a nuclear waste dump. Despite being buried at sea in a toxic waste container, Toffee’s tears call Jonny back…as a glow-in-the-dark zombie eager for a diploma and a boutonniere. Zombie injustice and teen rebellion ensue.

Zombie Prom lures solid regional talent out to Silver Spring. The strong cast is anchored by standout tenor Will Hawkins as doomed Jonny, Julia Kravens as his self-absorbed love interest Toffee, and Dallas Milholland as Doomsday Prepper high school principal Mrs. Strict. The real star of the show, though, is the live band, lead by Music Director Brandon Heishman. Those three guys belt out the score with enough talent and gusto that even the dead will tap their toes. Jane Rabinovitz’s excellent choreography gives the performers a workout with non-stop dance moves. Costumes by Debra Leonard are charming, cheery and appropriately letter-sweatered and swirly-skirted, and William Fleming transforms what 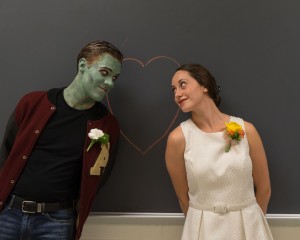 appears to be an old band practice room with a bright, clever, multilevel stage. The upbeat and energetic direction is by Unexpected Stage Company co-founder Christopher Goodrich

If you’re looking for Sophie’s Choice, this isn’t it. If you’re into goofy upbeat song and dance in a remote municipal office building basement, grab a group of friends and make the voyage to Silver Spring and back in time for Zombie Prom. But bring your spiked cider in a flask – soda and snacks only at the Randolph Road Theater.

The Unexpected Stage Company’s Zombie Prom is playing at the Randolph Road Theatre (4010 Randolph Road, in Silver Spring, MD) through October 30, 2016. Running Time: Two hours with one intermission. For information or tickets, call the box office at (301) 337-8290, or purchase them online.