Is there anything more powerful than watching the world premiere of a performance about Lincoln’s widow at the very theatre where she sat at his side when he was shot?  The rare experience wasn’t lost on DC theatre-goers as The Widow Lincoln opened late last month as part of the venue’s Ford’s 150 series — a commission to commemorate the 150th anniversary of the 16th President’s assassination. 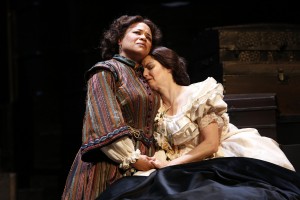 The show centers around one central character, the widowed Ms. President, played masterfully in her Ford’s Theatre debut by Mary Bacon.

Mary Lincoln: perhaps the United States’ most controversial First Lady.  Disdained for her perceived sense of entitlement, rebuffed for her spending habits, ridiculed for her peculiar behavior, and mocked for suffering from madness; but perhaps never portrayed so poignantly, so humanely… as a person, mother, and grieving wife as in playwright James Still’s heartbreaking The Widow Lincoln.

Set during those mysterious weeks following Abraham Lincoln’s assassination at Ford’s Theatre, with the world still wondering how she grieved self-confined inside the White House, The Widow Lincoln imagines the assassination’s effect on Mary, and how she mourned the calm post-war life she and her husband would never share.

The rivetingly tragic performance is on stage through February 22nd at Ford’s.