“I wanted to take a moment to talk about the American dream,” said George C. Marshall High School student Sanam Analouei as she helped to introduce Hall Of Fame Laureate Mark Ordan at the Washington Business Hall of Fame awards early last week. 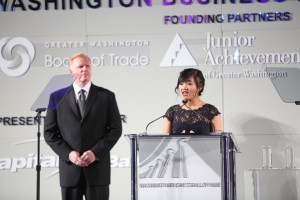 “Now, my generation has sometimes been accused of not having that same drive – the drive to achieve ‘the American dream’ through hard work. We’ve seen what a recession can do to the economy and to our job prospects. But we have also learned from these challenges: we are more motivated to become economically aware, more financially literate, and more engaged in the business world. Most of all, we have developed an understanding that opportunities are made not given. And that is what Junior Achievement is all about: providing the next generation with insight into business, and finances, and giving us an advantage which no other program provides. JA delivers a shared belief in the American Dream, and for that reason, I am proud to be part of such an important program.” 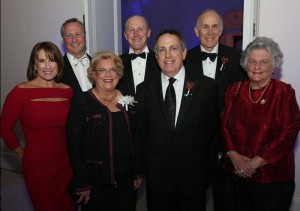 Analouei was joined by her classmate Tiffany Chong (above right), a Senior at George C. Marshall High School and a fellow Junior Achievement participant who would later introduce HOP laureate William Couper, to fete the Hall of Famers at the National Building Museum.