An uncommonly small cast is taking over the Shakespeare Theatre Company‘s Lansburgh stage, bringing to life the Bard’s tragicomedy “The Winter’s Tale,” his story of a king driven mad by jealousy. In this somewhat contemporary take on the classic, director Rebecca Taichman chose to dress the characters in modern-day clothing while remaining true to the original dialogue. She also, unusually, cast only nine highly talented actors to play 16 roles between them — a way, she explained, of examining the central theme of the play: the human spirit’s endless capacity for transformation.

All of the actors play roles in both the tragic Sicilia and the hilarious Bohemia, allowing viewers the chance to explore the duality of the human soul. Television, film, and theater star Mark Harelik — who you may 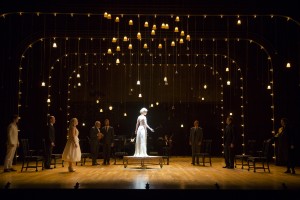 know from recent roles in “42” and “Awake,” among many others — takes on both the main role of Sicilia’s King Leontes and Bohemia’s comic thief Autolycus, clearly demonstrating his ability to bring an audience to joyous laughter after bringing them down to the deepest pits of despair. Another character audiences will not be likely to forget is the young shepherd, played by Tom Story, who left viewers in stitches on opening night.

The decision to have the characters change onstage also lends itself well to that examination of dichotomy, and watching the actors transition between roles is quite magical — almost as magical as the story’s twist ending, which manages to leave the audience with a feeling of catharsis. As Whitman once said — and Taichman points out in her message to playgoers — we are all capable of containing multitudes, and the power of forgiveness is truly an amazing thing to behold.