The National Chamber Ensemble (NCE) held its annual “Happy Holidays!” concert at the Rosslyn Spectrum Theatre on Saturday night, and while the PowerPoint slideshow left something to be desired in the way of décor, the music and talent did not disappoint. 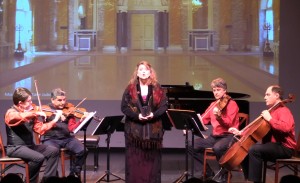 Local student musicians performed, as well– a nod to NCE’s mission of building “a sense of closeness between performers and audience that enhances the feeling of community and a deeper musical experience.” 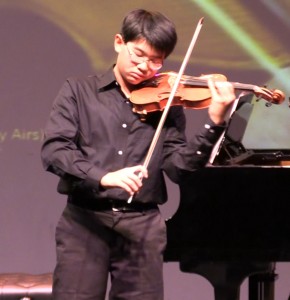 But one student in particular stole the show with his breathtaking solos. At just 12 years old, Brandon Du of Ellicott City, Maryland became the youngest winner of the NCE’s Outstanding Young Artist Achievement Award this year, and performed pieces by Bruch and Pablo de Sarasate at the concert. The speed, precision, and passion with which he played were nothing short of virtuosic.

How lucky are we to have such talent in our own backyard?!

Previous Post: Arena Stage’s ‘Moby Dick’ Is Visually Stunning and Not To Be Missed
Next Post: Inside the 8th Annual ‘Walk This Way” for Becky’s Fund