“As all of you know, I am not a botanist, or a scientist — I’m actually a foreign affairs columnist for the New York Times.  So what am I doing here?” joked Tom Friedman, keynote speaker at the National Tropical Botanical Garden‘s 50th anniversary dinner earlier this month.

The only botanical garden with a charter for the United States Congress, the NTBG’s purpose is to save and study tropical plants.  Encompassing nearly 2.000 acres of varied ecosystems and environmental conditions, NTBG’s five natural preserves are safe-havens for at-risk species and living laboratories for a range of studies.

The Garden’s evening anniversary celebration, held at the historic St. Regis Hotel, culminated a daylong seminar, from some of the most knowledgeable in the field, on the Garden’s ground-breaking fieldwork.  The award-winning journalist, columnist and Pulitzer Prize winning author — though he described himself as slightly out of place in the line-up — was one of the day’s most anticipated speakers. 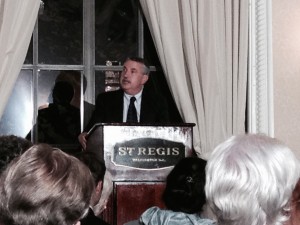 “I’ve actually had a long interest in environmentalism…,” Friedman explained from the podium, before detailing some things he has learned from nature, and, indeed, how those lessons blend into an understanding of political, geopolitical, and economic current events.

One of his best examples was the 2008 subprime crisis, calling it a “warning heart attack” from both the market and Mother Nature:

“In both the market and Mother Nature, we were underpricing risk, privatizing gains, and socializing the losses: we allowed people to massively underprice the risk of carbon emissions; we allowed those that did to privatize their gains with oil and coal; and we socialized the losses by spreading out all of that carbon across the whole global environment to be paid by coming generations.

“And because we were practicing the exact same accounting, it is no accident that in 2008, CitiBank, Iceland’s Bank, and the biggest ice bank in Antarctica all started melting at the same time.  And it was no accident at all that Bear Stearns and the Polar Bear both face extinction at the same time.