The James Beard Foundation recently announced the five recipients of its 2019 America’s Classics Award, revealing one honoree daily via the Foundation’s Instagram page.  And DC has a winner! 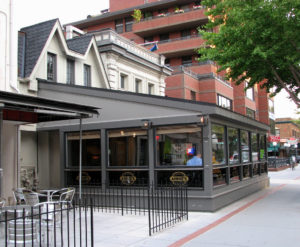 Annie’s Paramount Steakhouse (1609 17th St NW, Washington, D.C. 20009; Owner: Paul Katinas) endures as a nexus for the city’s LGBTQ community. George Katinas, a first-generation Greek-American and U.S. army veteran, opened the restaurant in 1948, and by the early sixties it had earned a reputation as a welcoming space for gay people. It moved to its current location in 1985, and George’s son, Paul Katinas, eventually took over. Through the years, Annie’s has remained a stalwart supporter of LGBTQ causes, among them the Gay Men’s Chorus, Whitman Walker Clinic, Food and Friends and the Pride parade. At Annie’s, the steaks are hefty, the burgers juicy and the cocktails strong, but what really keeps people coming back is the restaurant’s legacy of inclusiveness and respect.

The America’s Classics Awards, introduced in 1998, are given to locally owned restaurants that have timeless appeal and are cherished for quality food reflecting the character of their community.  This year’s winners will be celebrated at the annual James Beard Awards Gala on Monday, May 6 at the Lyric Opera of Chicago.

“In an industry where longevity is quite an achievement, it is important to honor and celebrate the establishments that have stood the test of time, like the restaurants being recognized as America’s Classics this year,” says Clare Reichenbach, James Beard Foundation CEO. “These restaurants provide not only wonderful culinary experiences, but are important and enduring pillars in their communities.”

Previous Post: ‘Admissions’ – Privilege, Power, and the Perils of Whiteness
Next Post: 14 of our Favorite Cupid’s Day Dinners, Date Nights… and Even a Singles Soiree