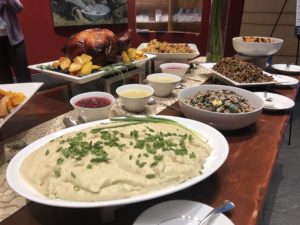 The first Thanksgiving.  It certainly wasn’t that harmonious European-Native American joyfest the history book proclaim it to be. The real story is likely much more contentious, so many might be surprised that Chef Freddie J. Bitsoie, a Native American chef at the helm of the National Museum of the American Indian’s Mitsitam Café, is planning to cook and serve Thanksgiving meals from Mitsitam this year. “Sometimes we’ve got to go against the grain and use timely topics to bring out the other side of the story,” he says.

Chef claims that it’s “ok to be in the middle of the argument,” because it gives him a platform to talk about how Native Americans feel about Thanksgiving — the meal, the holiday and the history.  “It’s a great way to try to tell people the true story,” he says, and in his opinion, move forward in a fusion of cultures. 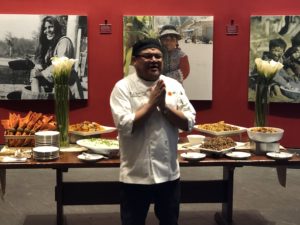 While the first Thanksgiving tale may be what Bitsoie calls a “mythical story,” he still gives credence to its themes of being preparation and readiness.  So his menu for Thanksgiving To-Go meals from Mitsitam Café this year centers around this idea of preservation — preserving culture as well as food.  It’s a delectable smorgasbord of upscale offerings, including a maple glazed oven roasted turkey, agave braised butternut squash, wild rice salad, three sister salad, pumpkin/chocolate bread pudding, and more. 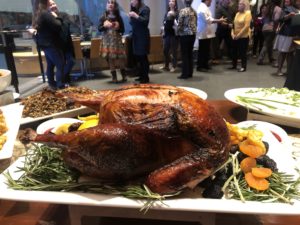 Serving 6-8 people for only $190, Mitsitam Café’s To-Go meal is selling out fast.  (Is this because we are conditioned to believe it’s tradition that we share this holiday with Native Americans? More likely it’s because it’s absolutely delicious. Trust us, we tried it!)

“Can we just have food and not worry about where these things come from?” Chef Bitsoie asks rhetorically.  “There is no shame in eating.  Whether it’s comfort food, trying new things, or fusing cultures. Just enjoy it.”

Based on last year’s sales, Chef is expecting to cap sales at 60 complete meals, but for those who miss out on pre-ordering, or those looking to dine out this holiday, the same menu is also available in the Café Thursday – Sunday (11/28- 12/1).  And these dinners aren’t just ‘doing good’ for his culture, but his DC community as well, because for every 25 complete Mitsitam Café Thanksgiving Holiday Meals sold, the Café will be donating a complete meal to Martha’s Table.

Maybe in this culturally sensitive time it’s odd that Chef wants to be such a part of the Thanksgiving story, but in his mind, he’s just taking back the narrative.  “What’s wrong with just celebrating this time with your family? Some families find it very traditional, while some don’t recognize Thanksgiving per se, but they still enjoy time together.  That’s the new tradition. Thanksgiving might not have happened historically, but it can happen now.”

Previous Post: Grab Your Seats: RENT’s 20th Anniversary Tour is Rebellion with a Side of Sing Along
Next Post: Full Transparency, DC Makes Its Own Hard Seltzer