Inspired by that ad, which featured top chefs stripping down to nothing, Pennsylvania’s Revivalist Spirits began its own “Naked Chefs” campaign last Fall, convincing six Philadelphia-area chefs to pose in the buff with bottles of Revivalist Gin, all to raise $5,000 to help the Hospitality Assistance Response of Pennsylvania (HARP).

Now sibling business partners Scott and Don Avellino of Revivalist Spirits are keeping the charitable momentum going right here in D.C., a city with its industry also in need. Six D.C.-area hospitality professionals took part in the latest round five of “naked” photos in an effort to raise money for The LEE Initiative — a restaurant workers relief program created by Lindsey Ofcacek and Chef Edward Lee.

“After seeing the incredible response and outpouring of support and money raised from our first round of this campaign, we knew we wanted to take this show on the road to help restaurant workers beyond Philadelphia,” said Scott Avellino. “While we originally wanted to just do something fun and put a smile on people’s faces, if we can also raise money to help a bunch of hospitality workers during these incredibly tough times, we know we’ve made a difference.” 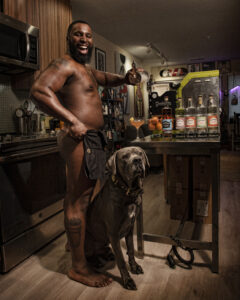 It’s a fundraiser that works this way: the Avellino Brothers will donate $1 for every share on Facebook, as well as $1 for every repost on Instagram (up to $5,000) to The LEE Initiative. #NakedChefs