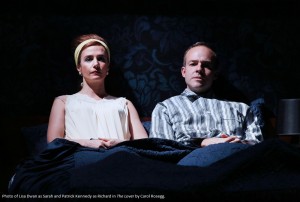 It’s safe to say that Nobel Prize winning playwright Harold Pinter takes a dimmer view of human nature. The double bill of The Lover and The Collection currently playing The Shakespeare Theater Company showcases Pinter’s bedrock belief in the impossibility of communication between human beings. The New York Times said of Pinter: “He uses language to convey miscommunication and lack of understanding rather than shared comprehension.” Pauses are disconcerting, words as simple as “What time shall I expect you?” take on menace, and sex is the drive train for all the tension. Every decent human act masks an indecent impulse contending for control. 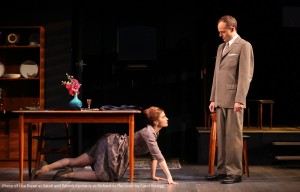 The Lover peels back the veneer of proper British suburban couple: Mad Men-esque housewife Sarah (Lisa Dwan), in swoon-worthy costumes from designer Jane Greenwood, and buttoned-down husband Richard (Patrick Kennedy), sporting an almost painful British primness. The play opens with desultory morning routine, followed by a reminder that Sarah’s lover comes this afternoon, and a chaste seeing-off kiss. What unfolds is a battle of wit, power, and passion that will have you tracing and retracing word and action to 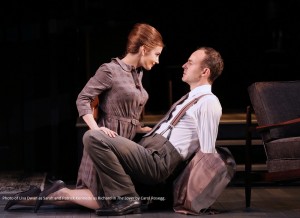 decipher the relationship. Do they love each other? Do they hate each other? Are they crazy? Your guess is as good as mine. The best estimate of the truth unfolds with the unavoidable reality of words.

In contrast, The Collection unravels in reverse, opening with a familiar scenario: A cuckolded man confronts his wife’s lover. Yet with each scene, we become increasingly unsure of the facts, the interpersonal dynamic, the sexual intentions, and the motivations. The married couple is again played by Dwan and Kennedy, while the wife’s supposed lover is the youthful half of May-September gay 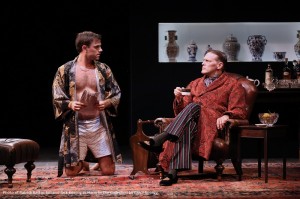 The paired one-act plays, originally written in the early 1960s, are expertly directed by STC Artistic Director Michael Kahn. While regarded as “early works” of Pinter, both scripts bludgeon with his hallmark wit, ambiguity, and deception. All four actors (and the cat Sweet Bea) excel at their spoken and unspoken dialogue. Finding your footing in the plot is like treading quicksand. Scenic design by Debra Booth and moody lighting from Mary Louise Geiger further the effect. 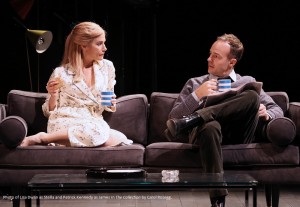 Pinter is an iconoclast, and if you aren’t familiar already, you should be. The Lover and The Collection embody Pinter’s gloomy views. If you want to be brilliantly confounded this is the outing for you.

The Lover and The Collection are playing at The Shakespeare Theatre Company’s Lansburgh Theatre (450 7th Street, NW, Washington, DC 20004) through October 29, 2017. Running time: two hours with one twenty minute intermission. For information or tickets, call the box office at (202) 547-1122, or click here.

Previous Post: Inside the All Things Go Fall Classic at Union Market
Next Post: [Party Pix] Inside Shinola’s Newest Store Opening in Tysons