“If you didn’t make the cut, get your beauty rest and maybe you’ll make it next time,” laughed The Hill’s new Editor in Chief (he officially starts Friday), Bob Cusack at the first ever party for the publication’s 50 Most Beautiful list, held at Poste Modern Brasserie Tuesday night. 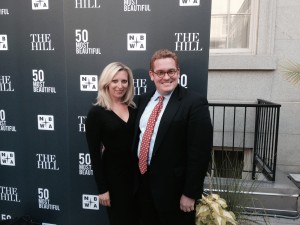 Cusack and Judy Kurtz, the paper’s “In The Know” columnist, hosted the inaugural event, on the day the paper’s 11th annual list of pretty people was released to an anxious audience.  From the some 400 nominated, only 50 made the cut, among them Rep. Bob Gibbs’ Danielle Sikes, who took home the No. 1 spot, CBS News’ Nancy Cordes, NBC News’ Kristen Welker, Senator Harry Reid’s Devron Brown, Rep. Austin Scott’s Carmen Fuentes, and Rep. Betty McCollum’s Meredith Raimondi.

How does the List come together?  Kurtz explained that this year editors pared down hundreds of nominations to ensure there were nominees

representing all aspects of the political world… and then took photos of about 100 nominees.  People working on Capitol Hill then voted on who they thought the most beautiful were, based on just a photograph without a name or job title.  It should be noted that there can be no repeats from previous years’ lists, and that having a Hill job or political affiliation is supposed to be a requirement.