The National Press Club has got a serious case of the (musical) blues!

alongside the restaurant’s standard menu for a sold-out crowd, the evening’s best special comes courtesy of some of Washington’s most gifted teenagers!

“You don’t get to see teens perform often,” noted Jake Serwer, the National Press Club’s Business Development Executive and the brains behind the event, which coincides with promotions for the city-wide DC Jazz Festival. “And because they are so young and 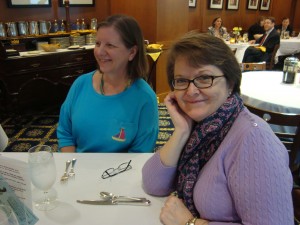 talented, we get to listen to future stars.” Playing the piano, base, drums, and sax, the musicians (some as young as 13!) are members of the Blues Alley Youth Orchestra.

Though many are familiar with the Georgetown institution’s daily professional performances, Executive Director Harry Schnipper explained that the Blues Alley, through its Youth Orchestra, is also home to “a music education programming process” for local teens. “What’s curious is that no one’s ever done what we do. No other jazz club in America has the same kind of program.”

And a KSM special tidbit almost as sweet as beignets: Non-members of the National Press Club receive 10% off their bill; members receive 15% off. Reservations accepted via OpenTable.com.

Check out a portion of the live performance right here!