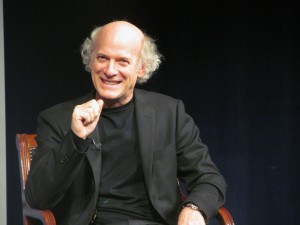 The exhibit is a series of 19 large-format portrait photographs, each depicting one influential person who was born each year of the 19-year baby boom, lasting from 1946-1964. There is a coffee-table book of the portraits available for purchase, as well as a documentary film.  The exhibit also includes a timeline of historic events, including 30 iconic items representing the baby boom generation. Visitors may add their own baby boom memories to the wall timeline with sticky notes.

This year is a big year for the baby boom generation, because it is the year that the last of the generation turn 50.

Greenfield-Sanders was joined on a panel by three of the subjects of his photographs, environmentalist Erin Brockovich (1960), historian Julieanna Richardson (1954), and actress Kim Cattrall (1956), during which each shared some of their thoughts on the film, photographs, and aging.

“Once I kind of started looking into what he was doing, I was like ‘I can’t believe I’m over 50!’ It was a huge surprise!” Brockovich said. 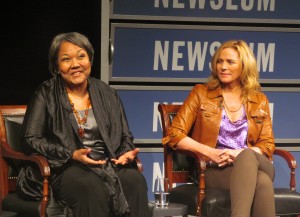 “Erin [Brockovich] was someone we wanted from the beginning, because Erin, to me, when you think of the environment and the tremendous accomplishments around that issue, and the failings as well, Erin Brockovich is just an iconic name. And who is that person? Who is the real Erin Brockovich,” Greenfield-Sanders explained.

When asked if she thinks about the aging process and sees/feels it happening, Cattrall said, “It’s happening. It’s happening real time, you know. Gravity is taking over, but I still have something to say. That’s what’s different about this generation, I feel.”

“I don’t like to romanticize, but I really believe that a lot of very very very positive things happened out of the boomer generation,” said Julieanna Richardson. “I hope that the boomers are just starting to be heard from.”

Guests had the opportunity to watch a preview of Greenfield-Sanders’ “American Masters” documentary, “The Boomer List,” which premiered September 23 on PBS. In the film, the selected boomers share their stories as a part of their shoots.