NPR showed off its new headquarters Wednesday morning, including Susan Stamberg’s office “shrine” to her career at the pubic radio powerhouse.

“I started giving it on the air every Friday before Thanksgiving,” said Susan Stamberg (at right), NPR Special Correspondent, Morning Edition, speaking to a delegation of local press of her Mama Stamberg’s Cranberry Relish Recipe.  “That’s how I will be known.”

“I just know that the lead-in for my obituary will be that cranberry relish… and the fact that I’m the voice in the elevator.  All these years of hard work and this is the legacy I leave!”

Stamberg, one of NPR’s “original” employees, jokes that there’s not much left from those first days — except a vintage lime desk chair that she keeps in the corner of her new office at public radio’s new headquarters, 1111 North Capitol Street NE.  As the media tour passes through her section of the NPR’s brand new, state-of-the art building, she ruminates, “I did a piece on the radio about it [the new building] in which I said we’re in Oz.”

Some 800 staff packed and moved into NPR’s new multi-level multimedia mansion — LEED Gold certified and boasting 100% digital broadcast systems — in April, but most wouldn’t know anything about the transition.  Scott Simon’s Weekend Edition was the first broadcast, but as it happened — literally — amidst the chaotic reporting of the Boston Marathon bombings and manhunt, the move obviously wasn’t the lead story.

The day’s events did give the new digs a chance to prove their purpose. 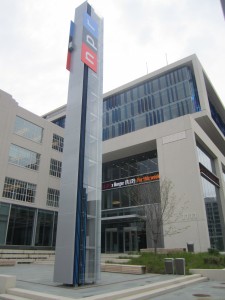 “Part of the design plan was for good interaction.  Here, you see people,” said Stamberg.  “You are passing in the hall or looking down on them (which is always a position I like to take!)” she joked.  And the connections help create better content all around.