Congratulations to 23 year old Teresa Davis on winning the title of Miss District of Columbia 2014 Sunday night at the pageant held at Arena Stage. 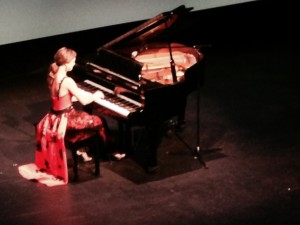 The 23 year old graduate of the University of Georgia played the piano, showcased a stunning black evening gown, and spoke about her chosen platform of service during the upcoming year: Five Star Families – A Salute to Military & Families.

Asked onstage in the final moments before crowning her reason for competing, she pointed her finger on high and said, “It isn’t for me, but for HIM the glory.”

Davis will go on to compete in the Miss America pageant in Atlantic City in September.

*Lead image adapted from a photo courtesy of Bruce Guthrie

Previous Post: Fiola Fetes 3 and Saved Some Cake for YOU!
Next Post: Meridian Honorees Given Standing Ovation for Stately Global Service