What President needs a monument when he can have a menu?!  Shadowing the success of its sister resto, Lincoln, the new Teddy (and the Bully Bar) opened last week, bringing with it a sense of history, humor, and some high spirits.

An excitingly edible tribute to the 26th President, Theodore Roosevelt, is now open to the public in lower Dupont.  Teddy & the Bully Bar — located right across the street from where he once lived while serving 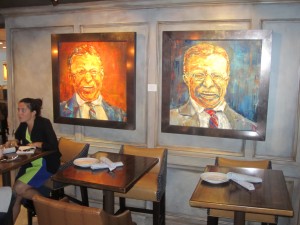 as Assistant Secretary of the Navy — is a testament to Teddy’s taste.

Under the direction of local celebrated artist/interior designer Maggie O’Neill (above, with owner Alan Popovsky), the new restaurant space captures the essence and exuberance of Roosevelt’s range of interests, which surrounds a menu of flavors based on Teddy’s favorites, like bison, venison, fresh oysters, 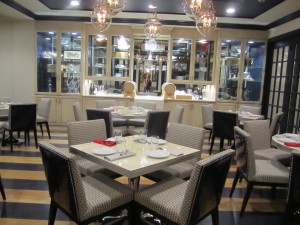 and a country fried chicken speciality — that are robust yet refined.

A bar program reflecting Roosevelt’s preferences includes homemade tonics, syrups and bitters used in modern interpretations of some of the most popular pours of the era, like a strawberry rhubarb iteration of the classic julep, and even a take on the “Rickey” — the official cocktail of DC.

And, trust us — don’t head out without stopping by the baths.  No tribute to Teddy (or Alice!) could be complete without a visit to a feminist’s mystique… or TR’s wooded wonderland.