Kings at the Studio Theater is a must-see for every Washingtonian. Written by Alexandria native Sarah Burgess, Kings is a play that uniquely speaks our language – so precisely in fact, it’s almost impossible to imagine how such a slice of truth from inside the beltway translates beyond our borders.

You wouldn’t think a play about legislation addressing a carried-interest tax loophole would be fascinating, but it is. Prickly newly elected congresswoman Sydney Millsap (Nehassaiu deGannes) stomps into DC with a sense of duty and a revulsion for the pay-to-play fundraising system of elected government. A political neophyte, she refuses to play by the rules, which canons are 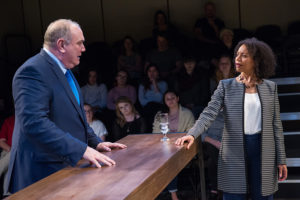 The ensemble piece boasts a strong cast, with McCrann as a particular stand out as a lobbyist caught in conflict between the reality of the Washington machine and a call back to her convictions. Under Marti Lyons direction, the palpable tension between the characters is taut and enthralling. But the play’s real protagonist is the system itself, and how the current grind of the political machine eviscerates the ethically pure, leaving our government in 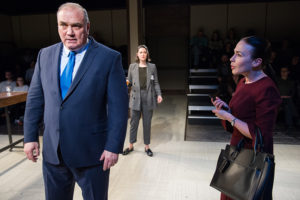 the hands of lobbyists and venal politicians. If Burgess leaves us adrift at the end, wondering at her message and lacking resolution, there’s no doubt her dark comedy lacerates the shiny red, white, and blue image of democratic freedom.

Sarah Cubbage’s costumes and Luciana Stecconi’s simple, yet clever, revolving set perfectly evoke the tone of where things actually get done outside the halls of Congress. The rapid fire dialogue is clever, cutting, and current. The characters parry brilliantly, with smart repartee and wicked verbal stilettos, rendering Kings both enlightening and entertaining. 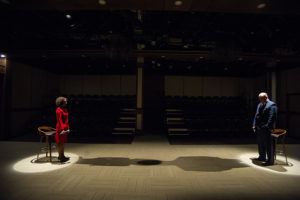 Previous Post: The 15 Best Deal Reservations to Snag for Winter Restaurant Week 2019
Next Post: Meet This Angel of #AutismAwareness Who Calls the DC Area Home