I heard it was Michael Kahn’s favorite play: Henry IV.  And he’d tell you it was because “there is no other play in the English language which so completely captures the complexity and diversity of an entire world.”  I think it must also be — especially for an Artistic Director — in this show, there is a role for every age, every strength, and every temperament.  And that’s why I liked it.  No matter who you are in the audience, you have a character to root for.

The Shakespeare Theatre Company presents Shakespeare’s epic play(s), Henry IV, Parts 1 and 2, over multiple nights this Spring, showcasing one of the Bard’s famous historical dramas and painting its personages not just as kings and mighty warriors — but also as men and women with common feelings, fears and ambitions.

At the heart of Part 1 — although there are a number of plots and personalities to follow — is young Prince Hal (Matthew Amendt), King Henry IV’s (Edward Gero) eldest son and heir.  He’s been not living up to his potential at a tavern in Eastcheap, making friends with the unsavory Sir John Falstaff (Stacy Keach), while his rival, the oft tempestuous Hotspur (John Keabler), has been earning the respect of the King for his bravery.  Hal has plans to turn his life around… and a plot between Hotspur and others to overthrow the King and divide the kingdom gives him just the chance to show his sincerity and merit on the battlefield.

There are tavern scenes, love songs, sword fights, memorable speeches and juxtapositions of comedy just when 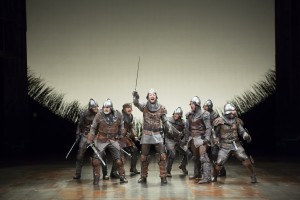 all of that war stuff starts to get too heavy.

Part II sees the surviving characters continuing to fight the rebels — and their own rebellious raw human emotion.  Not quite as popularly produced as Part I (surely, less sword fighting can be the only reason!), this performance night is less about marching to war and more about coming to terms with mortality, and the new order that takes place after an older regime.  And then there’s Falstaff… still trying to get by on his charms and connections.

Everyone’s waiting to see what Hal will do when he finally assumes the throne.  Will he continue to coddle Fallstaff, or will the friendship fall away when he comes to understand the responsibility of being King?  Kahn hopes to make this play one of your favorites with a dramatic conclusion.