The stars align — “and the stripes, too!” as Maryland Governor Martin O’Malley told us — for an anniversary to “wake us up from historical amnesia” (that one’s a credit to Fort McHenrys Ranger Vince Vaise).  Because 200 years ago, the British invaded Maryland, and now you are invited to do the same!

It’s called the Star Spangled Spectacular, and it’s a free festival to commemorate the bicentennial anniversary of our national anthem, kicking off June 5th and continuing all summer long.  Tall ships, cannons, and even the Blue Angels are coming out to behold the Star Spangled Banner… and so should you!

There’s a lot going on during these months of celebration, so here’s our take on the best of the Bi in three parts:

1) The first meeting of the original Star-Spangled banner manuscript and the flag that inspired it.  That’s right.  The first time.  In early June, the original handwritten manuscript of — all four stanzas of — Francis Scott Key’s lyrics (which would later become the national anthem) will leave the Maryland Historical Society to tour the Mid-Atlantic. Best stop: June 14th – July 6th at the Smithsonian Institution’s National Museum of American History.  Truly appreciate the perspective of Francis Scott Key in the “dawn’s early light” as the two iconic historic documents share the same environmentally controlled chamber for the very first time. 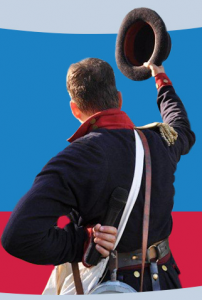 2) The Chesapeake Campaign.  This is a traveling festival which features living history demonstrations and interactive fun along the Star-Spangled Banner National Historic Trail.  The 560 mile recreational route connecting Maryland, Virginia and the District tells the tale of the War of 1812 as only landmarks can… and now offers many ways to experience the war’s drama and the stories of the people involved — like paddling the wetlands where Barney scuttled his fleet, imagining British attacks from the waterfront of picturesque St. Michaels, or visiting the best preserved War of 1812 battlefield at Caulk’s Field on the Eastern Shore.  Special events like reenactments of select battles (on the actual dates they took place!) make the campaign really come alive.

3) The Fort – The Flag – The Fire.  Fort McHenry National Park is actually a hotbed of the action all summer long, but you’ll want to pay attention to the main events happening September 6th through 16th.  An especially not-to-be-missed evening happens on September 13th, when a concert and fireworks display lights up the Harbor on the very day when Key saw his own rocket’s red glare and bombs bursting in air.  This is true hands-on history as (according to Visit Baltimore President and CEO Tom Noonan) “there’s nothing like holding the Star-Spangled Banner in your hands while standing on the same ground where it became famous.”

There’s always so much to do in DC.  This summer, go just a Fort farther, and play a little in the past in what O’Malley reminds us is “the state that’s been doing homeland security since 1814.”