A 150-foot “Wall of Honor” was unveiled Sunday morning at the World World II Memorial.  The wall, a pictorial of World War II veterans, is but one part of a series of nationwide Spirit of ’45 Day ceremonies to honor those that were soldiers during the “liberation of Europe.” 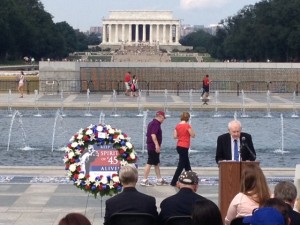 The Washington program at the WWII Memorial also honored the late Senators Daniel Inouye and Frank Lautenberg, the last WWII veterans to serve in the United States Senate. The two were responsible for leading the move to have Congress declare the second Sunday in August as “Spirit of ’45 Day,” commemorating the end of WWII on August 14, 1945.