Last Saturday night, DC embraced its dark side as The International Spy Museum honored 50 years of James Bond’s worst…the villians!  The highlight of the night was a guest appearance and signing by one

of the best-loved henchmen of all-time: Jaws.

Actor Richard Kiel, best known for playing the metal mouthed “Jaws” in the Bond films “The Spy Who Loved Me” and “Moonraker” signed memorabilia and posed for photos with fans throughout the night as they meandered through the museum’s Exquisitely Evil exhibit, which showcases over 100 artifacts from the films—from vintage villain shoes to tarot cards (featured in Live and Let Die) to those steel teeth worn by Kiel.

“The night was so much more than I expected. I got to meet ‘Jaws’ and ride a mechanical shark. Not to mention, honor the best part of James Bond, the villains!” said Chloe Burmsa, a lively local native on hand to enjoy the party. 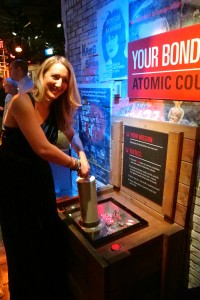 Guests of the exhibits harkened back through time as they traveled with James Bond through the eras of The Cold War, the technology age, American’s drug culture — and into today’s era of weapons of mass destruction. The final exhibit featured 2012 Skyfall’s Assassin’s assault rifle, a scaled model of the slick, damaged, Aston Martin DB5 mini and Silvia’s laptop, all featured in the film. The exhibits displayed many interactive crowd favorites, such as an atomic bomb deactivator; a missile launcher, a spy lair and a hang time stimulator.

After exploring, attendees got shaken (not stirred) on two floors of dancing, with strobe lights and… a mechanical shark!  There was also an Evil Cat Photo Gallery and the now ubiquitous event photo booth, where partygoers posed with friends and villainous 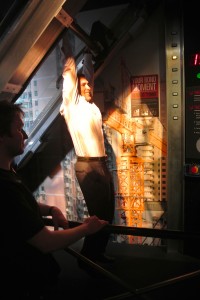 “We sought out to host an event that would entice a new audience to experience the International Spy Museum and all of the history we have to offer, while providing a unique and engaging evening outing,” said Jason Werden, Public Relations Manager for the International Spy Museum.  “Having sold out the event to more than 700 interested guests… I’d say we introduced a new audience to the intriguing history of espionage.”