The latest stage trend is to adapt the songs of a group and morph them into a story.  But what if story were superfluous… if the songs could speak 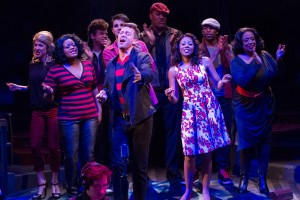 for themselves??  Well, that would be Smokey Joe’s Cafe — a show (and spectacle!) that originally opened on Broadway in 1995 and became the longest running musical revue… now on at Arena Stage.

Your ticket takes you back to the Golden Age of rock, rhythm and blues with this tribute to the songs of legendary songwriting team Jerry Leiber and Mike Stroller.  Sing and sway along to hits like “Hound Dog,” “Jailhouse Rock,” “Stand by Me,” “Love Potion #9,” and “On Broadway.”

Yes, the music is a backdrop for history (Baby Boomers in the audience may have the most fun!), but its as enjoyable for the

20-something as it is for their parents!

Dance and theatrical expression surround the band as music takes center stage — literally.  You’ll sing along to your favorites and maybe even remember some of their lesser known hits (yes, you’ll be shocked… they really wrote ALL of these!).

And be especially thankful that Nova Payton and Stephawn Stephens are in this cast.  While the entire company is spectacular, their voices really give this performance that extra special something.