A new exhibit at the Smithsonian National Museum of Asian Art is taking guests to the devastated sites of Mosul, Aleppo and Palmyra — highlighting the destruction, but also offering hope for reconstruction and rehabilitation.

Age Old Cities: A Virtual Journey from Palmyra to Mosul (available to experience until October 25th, 2020) is a tech tromp through Palmyra, Aleppo, and Mosul via aerial footage and virtually reconstructed imagery of devastated sites in these war-torn locations, all available through large scale digital projections on the lower level of the Smithsonian’s Arthur M. Sackler Gallery.

The projections shift gradually from destruction to progressive reconstruction. 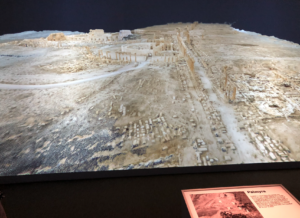 Videos throughout the exhibit also introduce guests to people who still live in these cities, as well as archeologists and curators who work at personal risk to protect and preserve.

After the exhibition’s success in Paris, it is now traveling the world, and coming first to the United States at the Smithsonian Museum of Asian Art.

Both the wonders lost at these devastated sites and the landmark tech used to exhibit them are “expressions of pure human genius” according to Chase F. Robinson, the Dame Jillian Sackler Director of the Smithsonian’s Asian Art galleries. “This exhibition narrates the heartbreaking story of cultural destruction – and resilience – in these cities.” 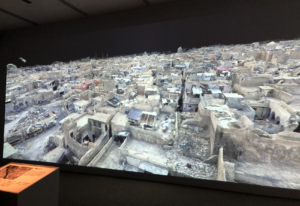 “While technology reveals and documents the extent of the destruction at these three chosen sites, and the disappearance of centuries-old culture and history… it also raises awareness of the wonders of heritage and the critical importance to preserve it now,” said Aurélie Clemente-Ruiz, Curator, Arab World Institute, Paris, at the exhibition’s pre-opening.

“It is our hope that this art will raise awareness of the urgent need to… save treasures of humanity.”

Age Old Cities has an accompanying virtual reality experience which happens on the first Saturday afternoon of each month (second Saturday in July due to Independence Day). This original experience of realistic and sensitive immersion allows guests to virtually travel and exist in six emblematic sites — the Temple of Baalshamin (Palmyra, Syria), the Souk of Aleppo (Syria), the Tunnels of Nabi Yunus (Mosul, Iraq), the Church of Our Lady of the Hour (Mosul, Iraq) and the Great Mosque of al-Nuri (Mosul, Iraq) — thanks to carefully rendered sound, lighting, and animation. 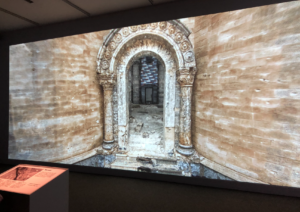 Age Old Cities: A Virtual Journey from Palmyra to Mosul was created by the Arab World Institute, Paris, in collaboration with Iconem and in partnership with UNESCO and Ubisoft, with support from the University of Lausanne and L’Oeuvre d’Orient.