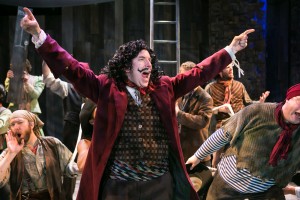 If Constellation Theatre Company truly aims (as they say they do) to tell “big, powerful stories in an intimate space,” to seek out plays that “feature visual spectacle, original music, dynamic movement and a passionate acting ensemble” drawing on “fantasy, farce, and epic adventure…” then they absolutely nailed it with”Peter and the Starcatcher,” now playing at Source through March 12. 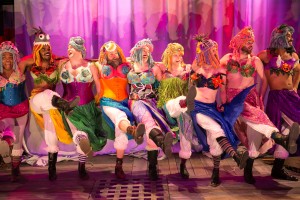 The play, written by Rick Elice and based on the book by journalist/comedy writer Dave Barry and novelist Ridley Pearson, imagines Peter Pan before he became “the boy who wouldn’t grow up,” recounting his life as an orphan in England and the unusual chain of events (poetic pirates, treacherous typhoons, irate Italians, magical mermaids, “starstuff,” and alliteration!) that lead him to Neverland. 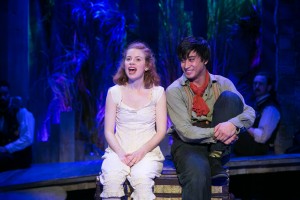 Just thirteen actors fill the shoes (or fins, or claws…) of over 50 characters, while a relatively modest wooden stage, splashed with colorful lighting and strategically placed ropes and sheets, convincingly represents the deck of a ship, the dingy sleeping quarters below, a tumultuous sea, and, eventually, a not-so-desert island.

Add in the live music, surprising costumes, topical (and hilarious) word play, and no small amount of acrobatics, and the show definitely lands among the stars. 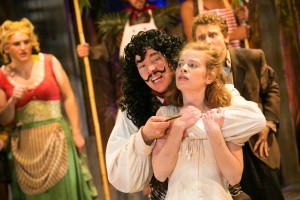