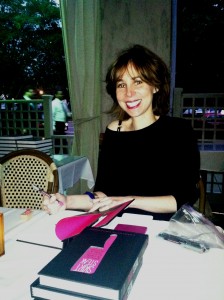 The renowned food journalist was at Johnny’s Half Shell Thursday night for the DC launch of her new book, “Skirt Steak: Women Chefs on Standing the Heat and Staying in the Kitchen,” which features interviews with 73 of the “best and brightest women cooking today.”

“The number one misconception [about women chefs] is that there aren’t as many of them as there actually are,” Druckman told K Street Magazine at the event.

An art history PhD candidate, Druckman was first inspired to write on gender in the kitchen by art historian Linda Nochlin, who in the 70s challenged the art world with her seminal essay asking, “Why have there been no great women artists?” While writing for Food and Wine Magazine and amazed at the growing celebrity of male chefs, Druckman began to think, “You could almost say the same thing now about chefs.”

“So I wrote a piece about it for Gastronomica,” explained Druckman; and among

the feedback she heard was “’I had rather she had just spoken to the [women] chefs.’ And I thought, that would be awesome.”

The women of the restaurant industry agree.

“When I had arranged a time to talk to [Charlotte for her book] I had anticipated a 20 minute conversation,” said Top Chef finalist and The Chew TV personality Carla Hall, who co-hosted and catered the reception. The meeting took an hour and a half. “There’s something very special and unique about the camaraderie with female chefs.”