“The inspiration behind the new menu was really taking a creative approach to classic diner food,” said Satellite Room Head Chef Wylie Ballinger.  “Mixing these new tastes with known classics created a great combination which made designing the new menu so fun.” 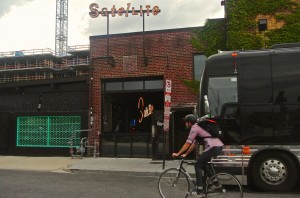 Surrounded by the concert culture of the 9:30 Club, The Satellite Room DC is a contemporary take on the classic diner that encompasses great Washington legends. Often hidden behind tour buses, it’s no surprise that the diner’s new menu would honor some of the great local musicians that have played right next door, like Chuck Brown.

The Chuck Brown Burger — which happens to be Head Chef Wylie Ballinger’s favorite new menu item — encompasses the Godfather of Go-Go’s spicy twang through chipotle aioli and pepper jack cheese, and the sweetness of his soulful sound through ingredients like avocado and roasted poblano. One of many celebs that also made the cut for The Satellite Room’s new menu, Dave Grohl, has a SoCal style burger in his honor, topped with roasted red peppers, goat cheese and arugula. 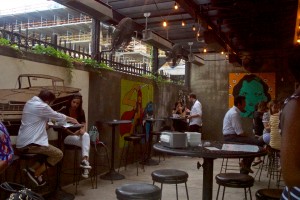 All of these new, notoriously named burgers are served with tots, which can be loaded with striking toppings like bacon syrup, chili cheese and even whiskey cheese. The new menu also adds new creamy, booze-infused shakes such as the Archie Leach (Strawberry with Tanqueray London Dry Gin) and Vincent Vega (Vanilla with Bullet Bourbon) so you don’t have to worry about choosing between drinks and dessert.