Stars of sport and screen joined Wendy (Red) Ezrailson Thursday night at the opening of the newest Reddz Trading Company in Georgetown.

“Red,” no stranger to the Georgetown retail scene (she own popular former shops Commander Salamander and Up Against the Wall), made her return to its bustling shopping streets this week with the opening of an additional location for her secondhand clothing company, Reddz Trading.

Inviting pals Giuseppe Lanzone (two-time Olympic Rower) and award winning actor Vincent DePaul (“West Wing,” “House of Cards”) to join in the fashion festivities (though the store does not currently carry male offerings and neither man admitted to having ever done “consignment”), she and Washington Life welcomed style 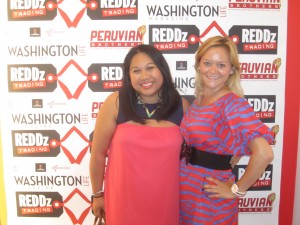 savvy patrons from across the city to snatch up discounts on truly designer items.

What sets Reddz apart from its multiple resale neighbors? (Tari, Ella Rue, and Annie’s Closet are literally steps away.)  Reddz buys outright from consignors.  So you should expect to net a bit less for your closet discards, but you’ll be paid right away!