Did you think you saw people flying over the Potomac River, Saturday?  It’s true.  All thanks to Red Bull.  This is why they say it gives you wiiings.

This weekend, twenty-nine teams from across the northeast used their own specially 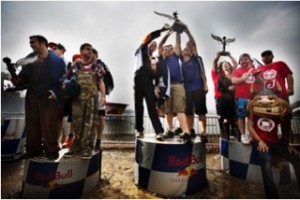 built craft to launch from a 24-foot high platform and attempt flight before splashing into the river at National Red Bull Flugtag DC. As part of a national day celebrating flight, this event was one of five (others happened simultaneously in Miami, Chicago, Dallas and Long Beach, California). 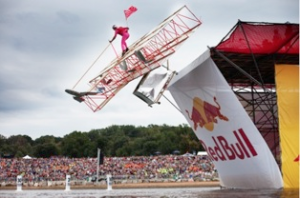 brave and the brainy to design, build and pilot homemade flying machines in hopes of achieving human-powered flight.  How far they fly is only one portion of a competitive score.  Creativity and showmanship are equally important.

“We had high hopes and we knew we had a solid craft,” explained Ryan Grabowski, a crew member on the winning Harvest Bureau flugtag team in DC from Pennsylvania.  “When we saw it take flight, it was a great feeling.”

The Farmers took home a first prize and the admiration of the some 10,000 spectators in attendance, but nationally, history was made in Long Beach where the new Red Bull Flugtag world record was set with a flight of 258 feet—shattering a previous 2012 German record of 229 feet.

More than 80 Red Bull Flugtag events have been held around the world since the first took place in Vienna, Austria in 1992.