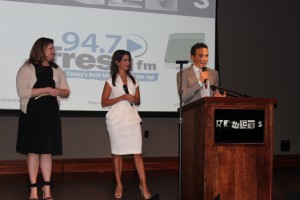 The Restaurant Association of Metropolitan Washington (RAMW) announced the finalists for its 2015 RAMMY Awards Monday night at The Hamilton Live. Hosts for the evening, Fresh 94.7 FM’s Tommy Show cast: Tommy McFly, Kelly Collis and Jen Richer led the lively evening celebrating some of the best restaurants in the area.

Food and drink samples from restaurants up for nomination circulated the room as everyone was abuzz waiting to hear which local treasures would be one step closer to taking the cake at the RAMMYs.

As in year’s past, four RAMMY categories are up to be voted on by the public on Washington City Paper’s website. The categories up for public vote are Favorite Gathering Place of the Year, Upscale Brunch, Everyday Casual Brunch and Favorite Fast Bites.

The 2015 RAMMYs will take place Sunday, June 7 at The Walter E. Washington Convention Center.  Foodie?  Looking for fun?  You can go!

Previous Post: The Originalist: Theater of Washington, by Washington, for Washington
Next Post: Because It’s Almost Swimsuit Season